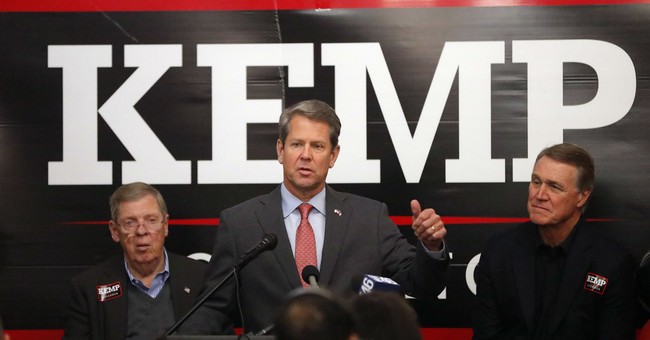 Georgia's Republican gubernatorial candidate Brian Kemp declared victory Thursday against Democrat Stacey Abrams, despite the race not being officially called yet. Several news outlets reminded him of that. He has also resigned as secretary of state.

During the campaign, Kemp was urged to relinquish the title because of questions over his handling of the voting process. Critics accused of him of suppressing votes by leaving 53,000 voter registrations in pending status.

Kemp had his own grievances about the voting system. This month he launched an investigation into the Georgia Democratic Party over what his office termed as a hacking of the voter registration system. Abrams called it a "witch hunt" and a distraction from his own controversies.

A group of especially frustrated Georgia voters even sued Kemp over the controversy, demanding he be prevented from overseeing the election results.

"Defendant's clear bias in favor of his own candidacy demonstrates the truth of the axiom that no man may be the judge in his own case," says the lawsuit filed in the U.S. District Court for the Northern District of Georgia. "This Court should not permit Defendant Kemp to resolve the outcome of the elections in which he is a candidate under those circumstances." (NBC News)

Kemp spokeswoman Candice Broce, who noted that county officials tally the votes, not the secretary of state, said this "twelfth-hour stunt" will not distract them from fulfilling their responsibilities to "ensure a secure, accessible, and fair election for all eligible Georgians."

Kemp insisted his decision to resign as secretary of state Thursday was not completely affected by these charges.

"I wasn’t really concerned about that but I think in light of where we are now, this will give public confidence to the certification process," Kemp explained during a press conference.

Kemp also shot back at his critics by noting that plenty of Democrats have done the same - act as secretary of state while running for office.

With his handling of the votes called into question, his critics had more opportunity to mock Kemp on Tuesday when he had some trouble voting. The voter card he was using kept saying, "invalid." As media noted, it was the voting system that he oversees.

Recommended
Wait...That's How Many Times The Fired Cop Who Set off Minneapolis Riots Was Flagged For Misconduct
Matt Vespa

GOP gubernatorial candidate Brian Kemp also had a voting issue today. When he tried to vote, his voter card said "invalid." Our @DaveHWSB was with Kemp today as he voted and is covering the campaign all night. #ElectionOn2 https://t.co/d4yktfco6v pic.twitter.com/YR9FeJUijj

Abrams is refusing to concede as she waits for more provisional ballots to be counted and prepares legal action for a potential recount. Kemp is currently ahead by roughly 60,000 votes.

If Abrams wins, she would be the first black female governor ever elected in the U.S. She had backing from notable figures like President Obama and Oprah Winfrey.

The race remains within one percentage point.