NC Officials: 'Worst Is Yet to Come' from Florence 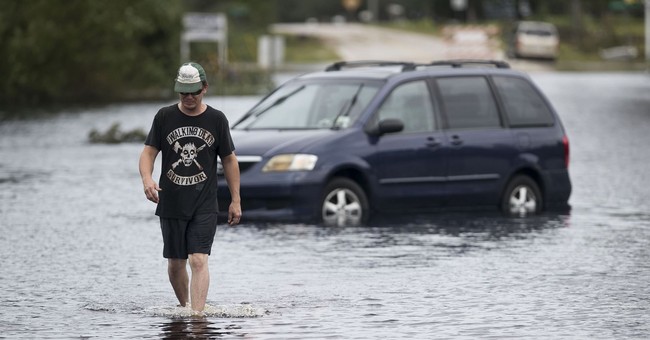 The storm itself may be over, but Carolinians will be feelings its after effects for quite some time.

"The worst is yet to come," warned Fayetteville, NC Mayor Mitch Colvin of Hurricane Florence over the weekend.

Other officials had similar forebodings.

“The storm has never been more dangerous than it is now,” North Carolina Gov. Roy Cooper said. “Many rivers are still rising, and are not expected to crest until later today or tomorrow.“

"If the levee fails, all bets are off," Mayor Bruce Davis eerily said about his city of Lumberton.

Florence has been blamed for 18 deaths so far. One of the casualties was a 3-month-old baby. Thousands of people have been placed in shelters and hundreds of thousands are without power. Elsewhere in the state, the storm has caused coal ash spill. That ash could contain toxic heavy metals like lead and arsenic. Other breaches could contaminate drinking water. The catastrophic floods will last for days and get worse, forecasters predict. The waters are so bad in Wilmington that it has trapped residents in the city. It is currently "an island cut off from the rest of the world," Washington Post reports.

TURN AROUND DON'T DROWN: This driver in Wilmington, NC, tried to plow through floodwaters and soon learned the only way out was through his car window https://t.co/yfBrr2TNK2 pic.twitter.com/HsxHmvczSA

Finances are less important than lives, but the storm has thus far cost the state of North Carolina billions of dollars, explained Sen. Thom Tillis.

There is some good news. Hundreds of people and animals have been rescued from the floodwaters.

"Eventually the skies will clear and the floodwaters will recede," Cooper said this weekend. "When they do, we're ready to take on the challenge of rebuilding our communities."