Did Media Ignore Another Trump Photo that Put Him in a Good Light? 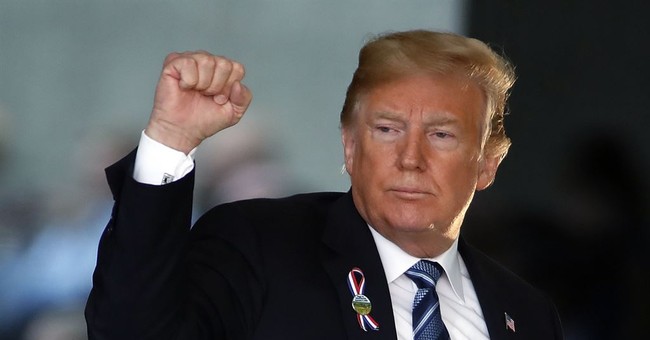 President Trump deplaned in Shanksville, PA on Tuesday to join a ceremony in recognition of the September 11 anniversary, and photographers were there to capture it. As always, there was one photo in particular that caused an uproar on social media. As the president walked over to greet supporters on the tarmac, he threw his hands up and fist bumped the air.

Is this President EVER appropriate? Trump gives double fist bump as he arrives at the Flight 93 9/11 Memorial Service. (Photo @dougmillsnyt) pic.twitter.com/Yt3SmINomT

Some Twitter users who saw the photo called Trump "soulless," an "embarrassment" and a "disgrace."

A writer for The Cut used that image, and a few others, to snarkily suggest that Trump was having a "hard time" honoring the anniversary of the 9/11 attacks.

"The president and first lady also walked around the Flight 93 National Memorial with the park’s superintendent. Naturally, Trump couldn’t resist giving photographers a big thumbs up as he enjoyed himself on the tour," she wrote, sharing the following picture.

And what about this one? pic.twitter.com/yWdcqesCWu

But, that's not the whole story. Right before Trump fist bumped, he gave a sweet hug to this young supporter.

The left lashed out at this picture of Trump getting off the plane on 9/11 and fist pumping 5 feet away from the crowd (conveniently left out of picture).

But look what happened right before that, which everyone seemed to ignore. pic.twitter.com/gvVB0yxLeu

Another person on Twitter noted that the crowd, "full of military men and women, were cheering, waving and smiling at Trump, as he approached them."

CNN used a video to skewer Trump for his exuberant fist bumping (Jen Psaki suggested he was "missing a human screw") but the footage showed he was just feeding off the crowd.

When Trump delivered his remarks at the 9/11 memorial service in Shanksville, CNN contributor David Gergen praised it as a "beautifully written, very thoughtful speech."

There are always more sides - and photos - to a story.