McCain Supporters Line Up to Say Their Goodbyes on Capitol Hill...and Condemn Trump 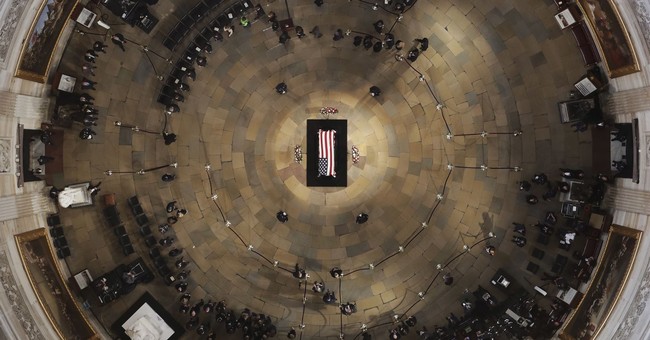 Washington, D.C. - Hundreds of visitors lined up outside the Capitol Visitor Center for a glimpse of Sen. John McCain (R-AZ) as he lie in state at the Capitol Rotunda Friday.

The line to see Sen. McCain is growing - and the rain stopped! #DC pic.twitter.com/bNpTWt3otU

Some, like this man named Reggie, had other motives for showing up on Capitol Hill. He was of course there to recognize McCain's years of service, but also to call out the "dishonorable service" of President Trump, who he also called a "coward."

Most of the people who caught a glimpse of Reggie's sign either gave him a thumbs up or an, "I agree!"

I overheard another group of visitors contrasting McCain's "statesmanship," with Trump's "showmanship."

Trump and McCain had a rather contentious relationship, dating back to the time Trump suggested the senator was only considered a war hero because he had been captured while serving in Vietnam, adding that "he likes people that weren't captured."

Inside the Capitol, lawmakers and loved ones remembered McCain at his funeral service. His wife Cindy, daughter Meghan, son and his 106-year-old mother Roberta were all there to say goodbye.

Pence, who said he was sent by President Trump, thanked McCain for his lifetime of service both in uniform and in public office. The vice president added that Americans "marveled" at his "iron will."

McCain is one of only 30 Americans to lie in state at the U.S. Capitol rotunda. His funeral will be held at the Washington National Cathedral on Saturday.