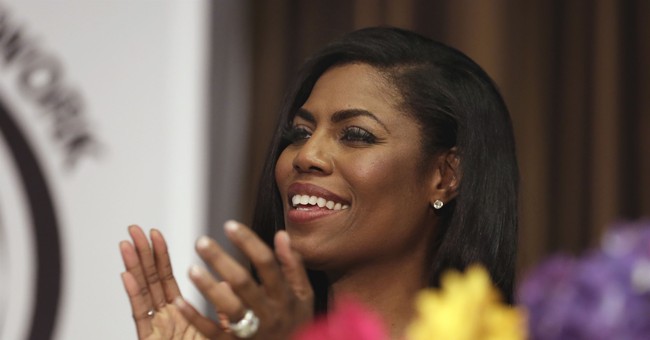 UPDATE: President Trump "thanked" Omarosa for all the well wishes.

The Republican National Committee is not letting Omarosa Manigault-Newman get the last word in her tirade against the Trump White House. Once an aide in the administration, she left on very bad terms. She has since written an unflattering book about her experience and has trashed Trump and anyone associated with him on a media blitz this week. In her recent interviews with NBC and a bunch of cable news networks, Omarosa did not flinch calling the president a "misogynist" and a "racist."

One of the biggest bombshells she revealed was that she secretly recorded conversations she had in the White House, including with President Trump. She already released a few of the tapes she has, like the ones in which Chief of Staff John Kelly fired her and when she called Trump to learn he had no clue about it. She has used those recorded conversations to try and prove that Kelly is a bully and that Trump has no handle on what's going on in his own administration - and she warns that there is plenty more where that came from.

The RNC is now here to remind her that other tapes exist, ones in which she sang a very different tune about Trump.

A few of Omarosa's rosier remarks featured in the video include:

"I was so happy when Donald Trump declared he was going to run."

"Donald Trump is a trailblazer of women's issues."

"This president is going to be incredible for this country."

"He was the right choice for America."

The last soundbite, perfectly chosen, is of Omarosa leading a large group of Trump supporters in a "Trump train" chant.

Omarosa has known Trump for 15 years, dating back to her first appearance on "The Apprentice." She was fired that season, and a couple more times after that. Fast forward to this year's White House exit, and Trump said that is the very last time he'll ever fire her.