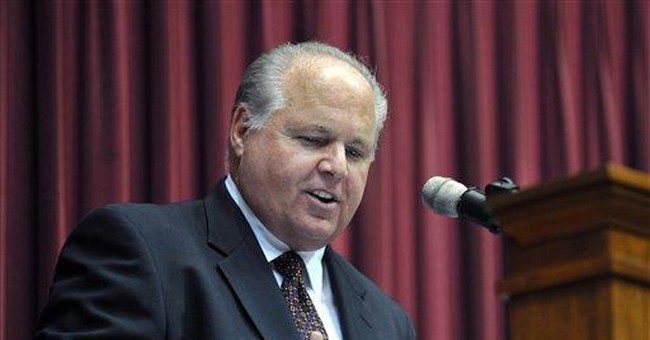 Conservative radio host Rush Limbaugh was humbled by a certain call he received during the taping of his 30th anniversary show on Tuesday. During one commercial break, Limbaugh's staff placed a note in front of him that read, "On the hotline you're receiving a phone call in recognition of your anniversary broadcast. You'll want to take this immediately."

"Who is it?" Limbaugh asked.

"So Rush I just wanted to congratulate you on 30 years," President Trump said on the other end of the line. "This is your favorite president and I think you are fantastic."

There was no mistaking Trump's very recognizable voice.

"I am floored," Limbaugh said, overcome with emotion. "I thought there was nothing anybody could do to surprise me today."

"You're a very special man, Rush, and you have people that love you," Trump continued. "I'm one of them. What you do for this country. People have no idea how important your voice is. So I just wanted to personally make this one. I said I'll even dial the number myself if I have to. I just want to congratulate you. Thirty years in that tough business is incredible. And you're stronger now than ever before."

Limbaugh would not be where he is today if he didn't take advantage of having the president of the United States on the phone and ask him a few questions.

"Are you aware" of the impact you've had on voters and the hope they've placed in you, Limbaugh asked him.

"I love these people," Trump said. "It's such an honor" to see the love and enthusiasm for him. He's happy to give something back to them, in the form of tax reform, for example, after seeing how "mistreated" they've been by politicians for years.

The president urged Limbaugh to stay on the air for "another 30 years."

"After that you can take it easy, okay?"

The surprise call is all on video.