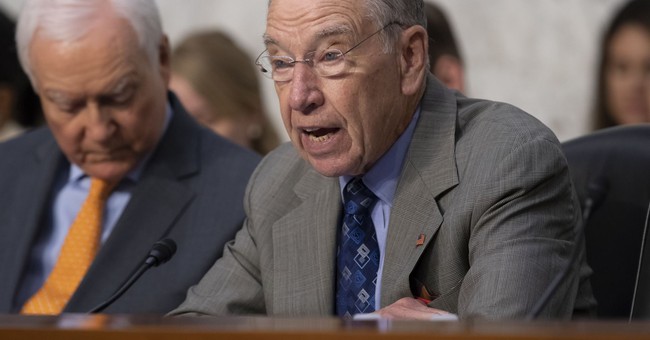 It takes a lot to get Sen. Orrin Hatch (R-UT) to swear on Capitol Hill, but he has had it with his Democratic colleagues' behavior toward President Trump's Supreme Court nominee Brett Kavanaugh.

Senators are heading down "duma** road" on their obstructionism, Hatch charged on Thursday, according to CNN's Manu Raju.

Full Hatch quote, said dumbass "road" not "role." "We can’t keep going down this partisan, picky, stupid, dumbass road that has happened around here for so long. I am sick and tired of it to be honest with you and I’m tired of the partisanship,”

Hatch's frustration with his friends across the aisle comes after Senate Minority Leader Chuck Schumer said they'd fight Kavanaugh with "everything they've got" and other Democrats refused to even offer Kavanaugh a  meeting.

Some Democrats say they are concerned that Kavanaugh will not keep President Trump in check. They've come to that conclusion after reading some of his past writings and speeches. Schumer even tried to prove that the nominee would've let Richard Nixon "off the hook" because of a comment the nominee once made, but that theory was quickly put to rest by Carrie Severino, who pointed out that Kavanaugh has heralded United States v. Nixon, the 1974 case that required President Nixon to turn over the subpoenaed Watergate recordings. Kavanaugh said that Supreme Court decision was an example of judicial "backbone" and one of the “greatest moments in judicial history.”

Hatch said Kavanaugh is a “choir boy” who has “not offended anybody as far as I can see.”

The senator's frustration spilled over from Wednesday, when he said Democrats had gone "borking mad."