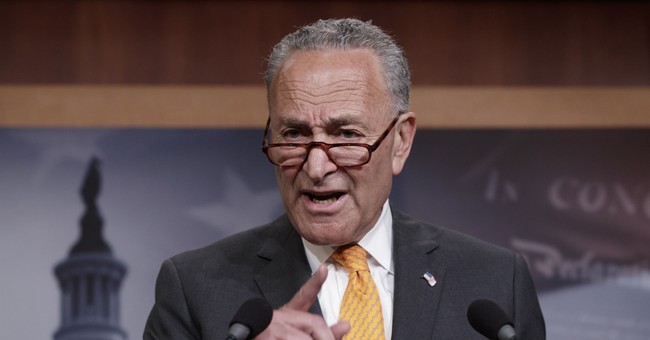 Senate Minority Leader Chuck Schumer wants to see Brett Kavanaugh's records from his tenure in the George W. Bush White House, probably in the hopes of finding incriminating information that could derail his Supreme Court nomination. Kavanaugh served as the White House staff secretary from 2003 to 2006. Schumer sent the former president a letter with his request.

“You have been an advocate of transparency regarding your presidential records, and you have previously taken steps to make portions of your library’s collection of White House documents more available to the public,” Schumer wrote. “I believe that making Judge Kavanaugh’s complete record is consistent with your commitment to transparency and is strongly in the public interest.”

Senate Judiciary Committee Chairman Chuck Grassley said in his own letter to Schumer that the committee will receive up to 1 million pages of documents related to Kavanaugh’s White House experience and believes Kavanaugh’s confirmation will be the “most transparent in history.”

Schumer is one of several Democrats who decided to define Kavanaugh's character before even meeting with him. They marched to the steps of the Supreme Court and declared they'd stop the nomination with "everything they've got." He was Trump's nominee, so he apparently didn't deserve a fair shot. In addition to demanding his old White House files, Schumer has been analyzing Kavanaugh's old writings and speeches to suggest that the nominee believes presidents should be shielded from all scrutiny.

Some Democrats are keeping an open mind, though. Sen. Joe Manchin (D-WV) is meeting with Kavanaugh. He told Schumer that if he's going to try and tell him to vote no he can "kiss his you know what."

Kavanaugh, who currently serves as a judge on the U.S. Court of Appeals for the District of Columbia Circuit, is Trump's second Supreme Court nominee. His first nominee, Neil Gorsuch, nominated after the passing of Antonin Scalia, was successfully confirmed by a vote of 54-45.