Pelosi: Jordan Should've Known About the Abuse at OSU 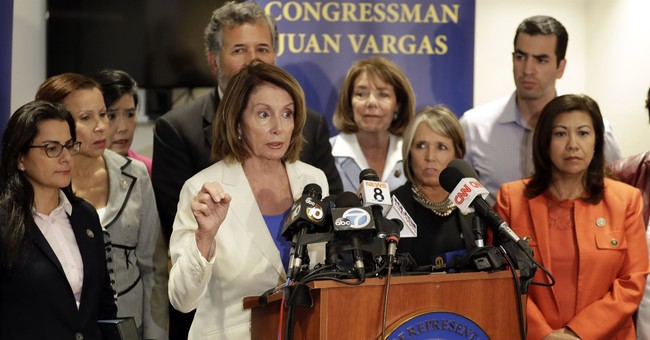 Rep. Jim Jordan (R-OH) is battling back against charges that he hid a wrestling team doctor's record of sexual abuse while he served as an assistant coach at Ohio State University. Two former wrestlers on the team insist Jordan was aware of Dr. Richard Strauss's behavior, especially because his locker was "directly next" to the accused. The congressman denies the allegations.

House Minority Leader Nancy Pelosi said the idea that Jordan had no inkling about the abuse doesn't square with the persona he tries to convey.

Jordan is known for being pretty confrontational and direct with witnesses during congressional hearings, including at Thursday's grilling of FBI Agent Peter Strzok. Here's just a taste of his exchange with the controversial agent, who sent scathing anti-Trump texts during two key investigations.

.@Jim_Jordan: "Are there three copies of the dossier as evidence by what you said in this email?"

Peter Strzok: "We received a variety of copies and different types of reports." https://t.co/n9rtHEvNOP pic.twitter.com/kdTnYoyzJ5

"Jim Jordan had a duty to protect them — they say he failed," Pelosi said on Capitol Hill. "Rather than deny and dismiss them, he should fully cooperate with investigation. That's what I think he should do."

Jordan's friends, meanwhile, have been quick to defend his integrity.

“What has been said about Jim Jordan is absolutely wrong," a group of OSU coaches said in a statement. "We all worked on the wrestling coaching staff during Jim’s tenure at The Ohio State University. None of us saw or heard of abuse of OSU wrestlers. The well-being of student-athletes was all of our concern. If we had heard of any abuse, we would have spoken up.”

A group of wrestlers followed suit and spoke highly of the congressman's honor.

“I wrestled at Ohio State from 1995-1999. I absolutely believe that Jim Jordan had zero idea about Dr. Strauss’s behavior," Matt Mondalek, who wrestled at OSU from 1995-1999, said in a statement. "Dr. Stauss conducted his transgressions behind closed doors and regretfully, I never told anyone except for my father. Jim Jordan is an honorable man that does not deserve this unwarranted attention.”

Critics want Jordan to resign, while others want at the very least a congressional investigation. OSU has hired a legal firm, Perkins Coie, to do its own investigation. You may know the name Perkins Coie because it was the firm hired by the Hillary Clinton campaign to work on the infamous Trump-Russia dossier.