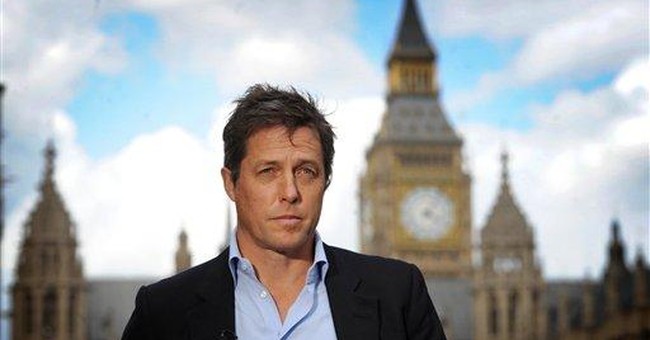 President Trump is not welcome in the United Kingdom, according to tens of thousands of Brits in the streets of London and elsewhere throughout the country carrying signs that read, "Trump not Welcome," "#DumpTrump," "Stop Pretending Your Racism is Patriotism" and more.

A Scottish newspaper emphasized the "racist" part in a sharply worded op-ed.

Milliband wanted May to take Trump to task, particularly after his controversial remarks about her in an interview with The Sun. In that interview Trump criticized May for not following his advice on Brexit. She "didn't listen" to him and pursued a soft Brexit deal instead. He backtracked a bit on those comments during a joint press conference with her, praising her leadership and the U.S. and the UK's "special" relationship.

The U.S. president also had tea with Queen Elizabeth II, whom he called an "incredible woman."

Milliband wanted May to push back at Trump, but conceded that she couldn't go "the full Love Actually," in reference to Hugh Grant's character's very public takedown of the American president in the film "Love Actually." See below.

The Telegraph offered a rough draft of how May's "Love Actually" moment could have played out.

Here’s how a similar scene between Mrs May and Mr Trump might look:

And a friend who bullies us is no longer a friend. And since bullies only respond to strength, from now onward I will be prepared to be much stronger. And the President should be prepared for that.

Nothing like that transpired during Trump and May's presser, however. To the contrary, they were very cordial and praised one another's leadership. Trump was of course asked about his interview with The Sun, but he insisted that he said plenty of nice things about the prime minister that should have made the headline.