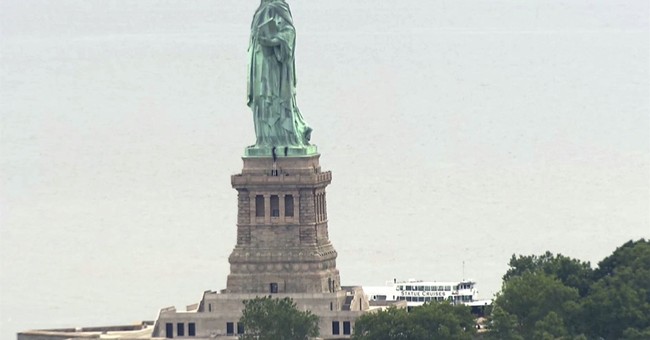 Authorities had to close and evacuate Liberty Island on Wednesday after a female protester scaled the Statue of Liberty. The woman, who was acting out against the White House policy of separating illegal immigrant families at the border, was eventually captured after a tense standoff with police. The ordeal lasted roughly four hours.

MOMENTS AGO: Woman just captured at base of Statue of Liberty. https://t.co/xlECIqCNtt pic.twitter.com/gHyFcsIPEA

Before the protester's climb, activists from a group called "Rise and Resist" hung a banner with a message about abolishing Immigration and Customs Enforcement from the statue. Six people were arrested after the stunt.

The group, however, claimed to have no connection to the daredevil.

The Climber on the Statue of Liberty has no connection to our #abolishice action earlier today. @NYDailyNews @ABC

But, their Twitter account followed up that message by retweeting a social media user who called the climber a hero.

A group of heroes unfurling an #AbolishICE banner and one woman scaling the actual base of the Statue Of Liberty with a similar message today. ?????? pic.twitter.com/9rsqjw5F7K

Immigration activists continue to demand the Trump administration end its zero tolerance policy of separating illegal immigrant families at the border. The president signed an executive order to keep families together, but it does not reunite those families who had already been separated.

Tourists in New York no doubt wanted to see the Statue of Liberty up close on this Independence Day, but thanks to these protesters' illegal behavior, they'll have to wait until next year.