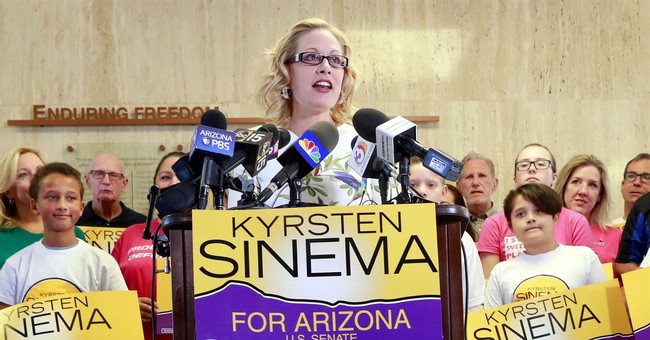 Democrats distancing themselves from Nancy Pelosi has become the rule rather than the exception in several midterm races, but it turns out some candidates are not fans of Chuck Schumer either. Rep. Kyrsten Sinema (D-AZ) has taken the lead in publicly criticizing the Senate Majority Leader, despite his offering his support last September.

Politico recently caught up with the Senate hopeful to ask for her thoughts on the New York Democrat.

Sinema, elected to the House in 2012, represents a real chance for Democrats to pick up the seat vacated by outgoing Sen. Jeff Flake (R) because of the infighting on the other side. Republicans continue to battle over the more mainstream candidate Rep. Martha McSally, former Maricopa County Sheriff Joe Arpaio and conservative outsider Kelli Ward. The Republican primary is Aug. 28.

In addition to criticizing Democratic party leadership, Sinema has been cordial to Trump - at least when compared to other Democrats. She declined to condemn him, noting that transitioning from a businessman to commander-in-chief is not exactly a piece of cake. At times she has even extended praise to Trump on veterans' issues.

“President Trump has signed every single piece of veterans legislation we’ve sent him, including some bills that we couldn’t get to President Obama.”

Still, as mentioned, Democrats have saved most of their ire for Pelosi. Sinema is no exception.

Democratic candidates in Arizona's House races are just as impressed with the House Minority Leader. The candidates running the state's second district were unanimous in their disapproval.