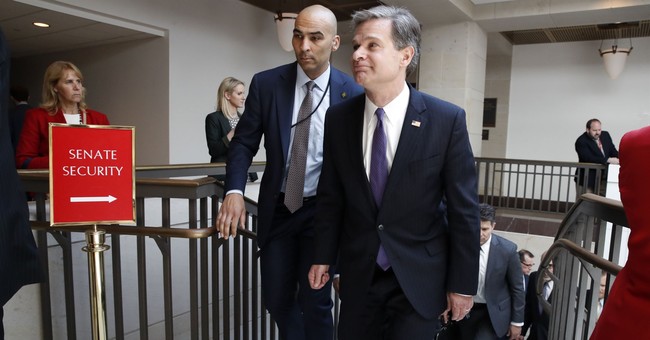 UPDATE:  “The FBI’s mission is to protect the American people,” Wray said at FBI headquarters Thursday.

The FBI accepts the IG’s findings and recommendations, the director continued. But, he noted that the report did not find any evidence of political bias actually impacting the Hillary Clinton email investigation.

He plans to hold employees accountable and has already referred action items to the FBI’s disciplinary arm.

“We’re doing it fairly and without delay,” Wray said. “We won't hesitate to hold people accountable for their actions.”

Change, he said, “starts at the top.”

Asked to describe his reaction to the IG report in one word, he said, "disappointed."

Wray did, however, defend the agency’s “brave” work.

“Nothing in this report impugns the integrity of our workforce as aw hole or the FBI as an institution.” Every day, he witnesses “extraordinary people doing extraordinary work” to uphold the Constitution.

FBI Director Christopher Wray is expected to respond to the newly released report from Inspector General Michael Horowitz that details how the agency handled the Hillary Clinton email investigation. The report, 500 pages long, detailed a number of missteps by the agency. For instance, a string of texts between two agents Peter Strzok and Lisa Page revealed their hatred of Donald Trump. Additionally, FBI Director James Comey stepped out of bounds in his handling of the email probe. There were plenty errors in judgment. Yet, the IG concluded there is no evidence DOJ prosecutors were affected by bias during the investigation.

The whole ordeal has, however, hurt the agency's integrity.

“We all want to see the day where we can close the book on this chapter and say, ‘That’s it," Wray told The Daily Beast ahead of his press conference. "That’s behind us. Back to business.’” He then highlighted a few of the steps the agency is taking to restore Americans' faith in them.

Wray said the inspector-general oversight will make the FBI “stronger as an organization.” As an accountability measure, he said he has “already referred conduct highlighted in the IG report” to the FBI’s Office of Professional Responsibility, and once the “appropriate disciplinary process” is complete, “we won’t hesitate to hold people accountable for their actions.”

He also noted that he will be requiring all senior executives to undergo in-depth training, followed by training for all employees.

"We’re not quite there yet,” Wray admitted.

Attorney General Jeff Sessions also said he hoped the FBI would use the IG report to become more accountable.

"Accordingly, this report must be seen as an opportunity for the FBI — long considered the world’s premier investigative agency — and all of us at the Department to learn from past mistakes. The Department is not above criticism, and it is accountable to the Chief Executive, Congress, and most importantly, the American people."

Democratic senators, meanwhile, pounced on the report as proof there is no deep state conspiracy against the president.

“I hope this will put to rest suggestions that there is some deep state conspiracy at the FBI or Justice Department and we can move forward with respecting the professionals who work in federal law enforcement," Sen. Chris Coons (D-DE) said.