GOP Senator Remarks on His Colleagues' 'Cult-like' Relationship With Trump 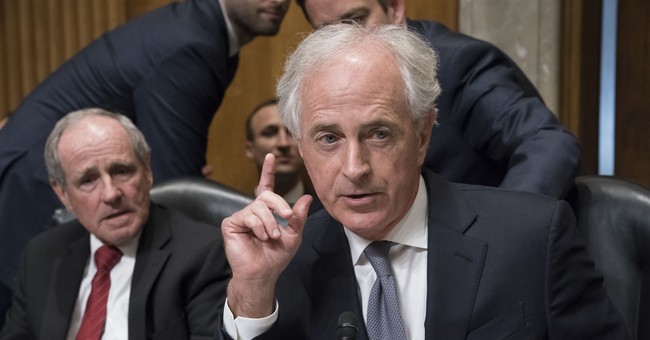 Retiring Sen. Bob Corker (R-TN), a known Trump critic, accused his colleagues of being too concerned about hurting Trump's feelings on Wednesday than doing their duty. Speaking to CNN's Manu Raju, Corker suggested that too many Republicans are afraid to weigh in on the tariff issue, for instance. Some, he said, are just "not willing" to speak up for what's right in regards to the tariffs against Canada and Europe. Corker introduced a bill that would require congressional approval for tariffs, but it has yet to receive congressional approval.

"We have a lot of people willing to do what's right," he said. But "some are fearful of the president," particularly the Republican leadership.

Corker likened it to a "cult."

CORKER rails on “cult-like” GOP, directing ire at GOP leadership for not wanting to take on Trump on core issues like trade: “We have an administration that wakes up everyday on an hoc basis, just making stuff up with no coherency to it,” he told us, pushing for his tariff plan

“We’re in a strange place. It’s becoming a cultish thing, isn’t it? ... It’s not a good place for any party to have a cult-like situation as it relates to a president that happens to be purportedly of the same party,” Corker says

Before this week, Corker had failed to say whether he'd support President Trump in 2020. Last year, he likened the White House to an "adult day care center." Trump returned the insult by suggesting on Twitter that Corker wouldn't even be able to get elected dog catcher in Tennessee and giving him the nickname "Liddle Bob Corker."