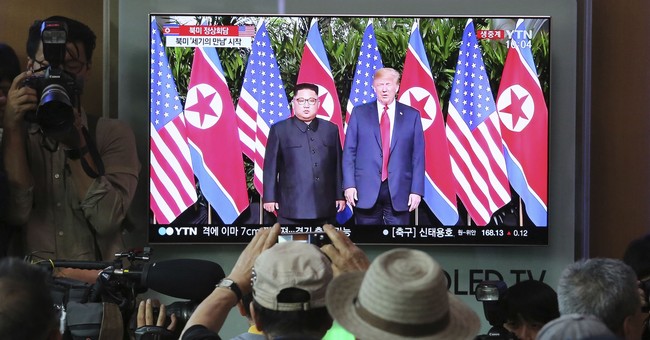 South Korea was apparently caught off guard by President Trump's announcement that the U.S. is canceling their long held joint military exercises in exchange for a promise from North Korea to denuclearize. Multiple NBC reporters in contact with South Korean officials say they had no idea the exercises were part of the negotiations.

“We’ve just had a statement from the South Korean military saying they are trying to work out basically what the President meant.”- @BillNeelyNBC pic.twitter.com/TxJM3UP27L

Neely's fellow NBC anchor Richard Engel added that when he reached out to the South Korean military, they said they'd have to take a look at the official documents and check the language.

"Regarding the U.S. President Trump's comment regarding ending of the combined military drill and so on, we need to find out the exact meaning or intention behind his comments at this point," South Korea said in a statement.

"They didn't see it coming" and were “blindsided,” Engel concluded. It was shocking, he said, because these exercises are fundamental to our military relationship with South Korea.

“In exchange for putting his name down to a letter promising to do something he’s already promised to do, he got the end of these very important military exercises… and he got to be on the stage recognized by the President of the United States.”-@RichardEngel on Kim Jong Un pic.twitter.com/HgdPdxc55l

U.S. forces in South Korea were also apparently clueless as to the decision to suspend the military exercises.

US forces in Korea said they had not received updated guidance on military exercises. “In coordination with our ROK [Republic of Korea] partners, we will continue with our current military posture until we receive updated guidance,” a spokesperson told Reuters.

Trump said his historic meeting with Kim Jong Un went better than expected. In their joint signed agreement at the conclusion of the summit, the two men made four key promises.