Trump Hits Back at Trudeau, Macron Ahead of G-7 Summit 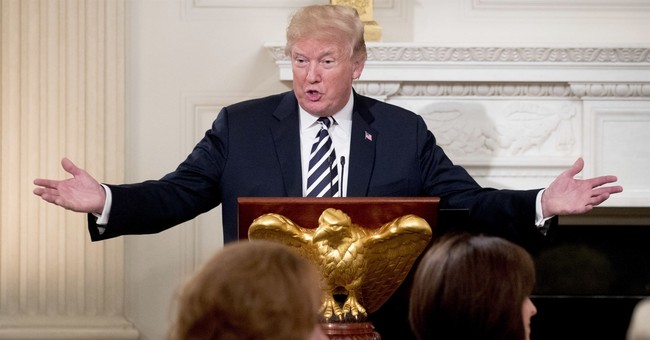 Canadian Prime Minister Justin Trudeau called President Trump's new tariffs "insulting" earlier this week, wondering why the U.S. was suddenly treating its Northern neighbor like a national security threat. Then, French President Emmanuel Macron spoke up. Despite his "bromance" with Trump, he too let the U.S. leader know he's not pleased with the new tariffs on steel and aluminum.

The American President may not mind being isolated, but neither do we mind signing a 6 country agreement if need be. Because these 6 countries represent values, they represent an economic market which has the weight of history behind it and which is now a true international force https://t.co/UA86fcjozs

Trump dug in his heels Thursday, though, and hit back with the following message the night before the leaders will meet face-to-face at the G7 summit in Quebec.

Please tell Prime Minister Trudeau and President Macron that they are charging the U.S. massive tariffs and create non-monetary barriers. The EU trade surplus with the U.S. is $151 Billion, and Canada keeps our farmers and others out. Look forward to seeing them tomorrow.

His tweet ended pleasantly enough, but he made it clear he has no intention of budging on tariffs.

After Trump chose not to exempt Canada and the EU from tariffs, both threatened punitive economic measures of their own. Canada, for instance, warned it would hit the U.S. with nearly $17 billion worth of tariffs on goods like toilet paper and maple syrup.

"We're not going to be pushed around," Trudeau said on NBC's "Meet the Press." He added at Parliament Hill in Ottawa on Thursday that Trump's economic move is putting American jobs "on the line" too.

Trump doubled down with another message singling out the Canadian leader Thursday.

Prime Minister Trudeau is being so indignant, bringing up the relationship that the U.S. and Canada had over the many years and all sorts of other things...but he doesn’t bring up the fact that they charge us up to 300% on dairy — hurting our Farmers, killing our Agriculture!

Macron, meanwhile, threatened to exclude the U.S. from the annual joint statement issued at the end of the G-7 summit.