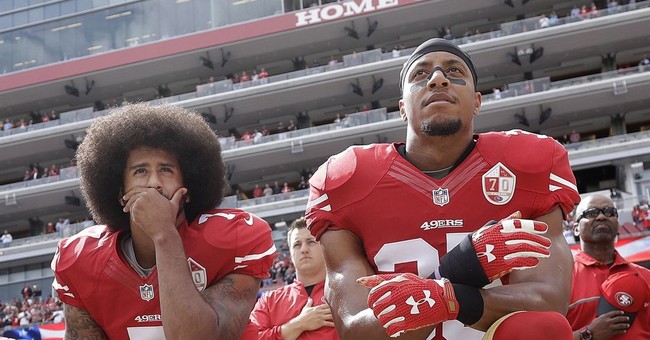 Pastor Darrell Scott, a Trump ally, told the press last week that the president has plans to host a summit on race relations at the White House - an idea that was reportedly inspired by rapper Kanye West's recent declaration of love for Trump.

"It’s going to be unscripted, unfiltered, blunt,” Scott told Politico. “No topic is off the table.”

Kaepernick, a former San Francisco 49ers quarterback, caused controversy two summers ago by kneeling during the playing of the national anthem. He explained that his protest was intended to shed light on how the U.S. criminal justice system is biased against minorities. But, that didn't stop patriotic football fans from booing him when he stepped on the field.

Trump weighed in on the protests during a rally in Alabama in September 2017, calling Kaepernick a "son of a b****" who should be thrown off the field. He has since softened his tone, it seems, and his advisors are now offering an olive branch to the former football player.

Some people like ESPN columnist Jemele Hill aren't quite warming up to the idea of a race relations summit, claiming it's all just a stunt.

In an op-ed about the potential meeting, Hill did acknowledge that Trump is heading in the right direction by "seeking greater understanding of complex racial issues," but "we’re a long way from giving Trump a cookie, as it can’t be forgotten how much Trump seemed to take a special delight in helping to torpedo Kaepernick’s NFL career."

Hill used to be an ESPN anchor, but was fired after tweeting a series of anti-Trump messages. In one tweet, she called him a "white supremacist."

Pastor Scott said the summit is being planned for the summer and would be open to all artists and athletes regardless of their political persuasions.