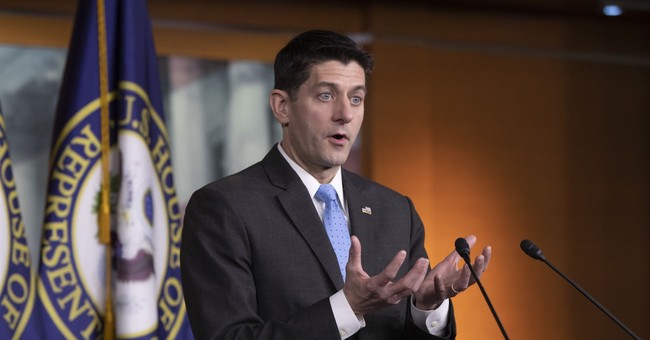 We usually put conservative in quotes whenever we talk about Washington Post writer Jennifer Rubin - and she gave us another reason to this week.

In her latest op-ed for WaPo, Rubin implied that House Speaker Paul Ryan now has a chance to redeem himself and recover his soul (her words, not mine), after too often being complicit in President Trump's agenda.

Ryan can get back in our good graces, Rubin suggests, by forwarding one of the bills to protect special counsel Robert Mueller from being fired by the president, by rolling back President Trump's tariffs and preventing a trade war, and by putting a clean DACA bill on the House floor.

There is no reason Ryan, who claims to be a pro-immigration, pro-free trade Republican and a “constitutional conservative,” could not address all three of these issues. (If a Democrat were in the White House, he almost certainly would protect a special prosecutor and free trade.) If he undertakes these initiatives, he could regain the respect of principled conservatives, rescue his legacy (in part) and be remembered for something other than running up the debt and enabling a protectionist, anti-immigration president who set news lows for fidelity to the Constitution.

Rubin was particularly hard on Ryan this week, publishing another column that accused him of "abandoning the ship before it sinks."

"Instead of achieving the entire GOP agenda, Ryan will leave a besmirched legacy defined by his decision to back, enable and defend Trump," she said.

Conservatives on Twitter call Rubin a "faux conservative" for her constant attacks on the Trump administration, such as hot takes like this: the Trump-Russia probe is worse than Watergate.