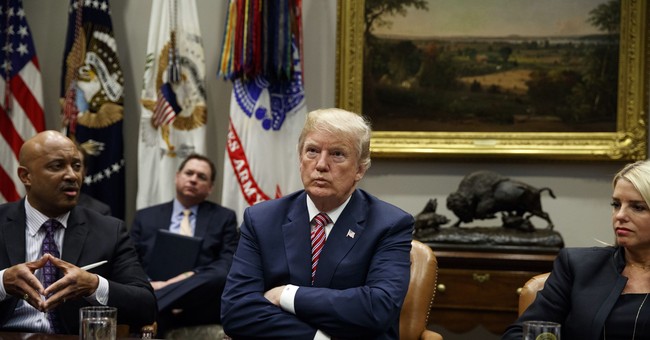 What's happening in California is a "disgrace," President Trump said Thursday at the White House during a roundtable meeting on safety and security with teachers and lawmakers.

The White House has been trying to crack down on MS-13 gang violence, but they've gotten "no help" from the Golden State, the president fumed. California leaders continue to support sanctuary city policies, harbor illegal immigrants and refuse to cooperate with Immigration and Customs Enforcement officers. Their rebellion has tempted Trump to leave them on their own and remove his ICE agents from the state.

"If I wanted to pull my people out of California you would see crime like you’ve never seen before," Trump predicted. "I could do it.”

California would be "begging" the White House for help before long, he said, and he's "thinking about" doing it.

Trump reiterated his arguments against gun-free zones, comparing them to welcome signs for killers.

"It is such a target for killers," he said.

These people are "cowards," Trump said, suggesting they would stay away from schools if they knew teachers were carrying concealed weapons.

One roundtable participant suggested active shooter drills, which Trump was initially opposed to, calling it a "very negative thing."

There was some pushback at other recommendations, but overall the participants seemed thankful that the discussion was being had. Democratic Parkland Mayor Christine Hunschofsky called it an "amazing" discussion.