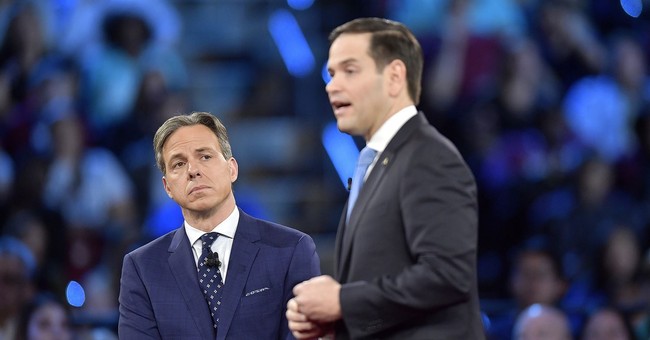 "Rubio knew it would be tense. He still showed up."

Sen. Marco Rubio (R-FL) accepted CNN's invitation to participate in a town hall event with school shooting survivors Wednesday night. He did so even though he knew he would not be facing a friendly audience. Many of the students who survived last week's carnage at Marjory Stoneman Douglas High School in Florida have called for new gun control laws, and they were in the audience to grill Rubio about his Second Amendment stance.

One young man, Cameron Kasky, asked Rubio if he would stop accepting money from the National Rifle Association.

The audience didn't like that answer, booing him then and at several other moments throughout the event. Matt has more details about how Rubio became the town hall punching bag.

It was a tense night, yet CNN applauded Rubio for making himself available.

Lastly, Rubio showed up for the CNN town hall knowing there would be a heated debate on guns and he'd likely get booed often. He answered questions directed to him and defended his stances on the gun debate, and many of the event's participants, even those who seemed frustrated with his answers, thanked him for being there.

Both Trump and Florida Gov. Rick Scott, a Republican, turned down CNN's invitations to participate. Trump held a listening session at the White House on Wednesday with high school students and teachers who have been affected by school shootings.

CNN also noted how Rubio distanced himself from President Trump over the suggestion that we start arming teachers and noting that he is reconsidering his position on magazine capacities.