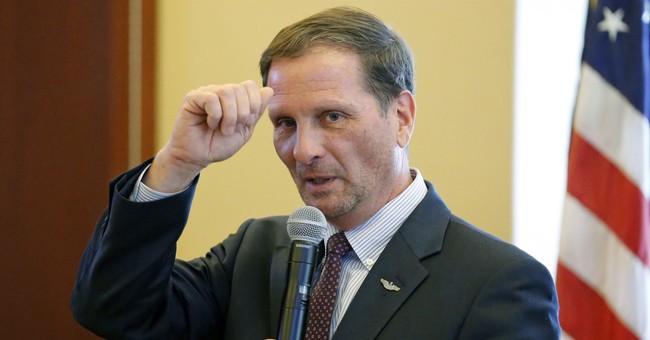 Rep. Chris Stewart (R-UT) is a member of the House Intelligence Committee, which compiled the much talked about declassified memo on FBI abuses during the 2016 presidential election. He appeared on CNN Friday after the memo's release to defend his and his fellow committee members' integrity.

The committee has a duty to investigate abuses within the intelligence community and report to the American people, Stewart explained. He regrets that the memo has led people to believe they are now all partisan hacks.

“I myself have been called a traitor,” he said on Wolf Blitzer's program. “It has been said that I care more about President Trump than I do about my country."

"These are my Air Force wings that my father wore," Stewart said, pointing to the pin on his jacket. "I was an Air Force pilot. I have members of my family that are deployed even now.”

Stewart said it's not just Republicans who wanted this memo declassified. He's spoken with some FBI officials who also support its release. The leadership guilty of these abuses should be held accountable and "agents feel the same way," he said.

"What in this report indicates we’d betrayed our country?" he wondered.

Blitzer didn't offer an answer, but noted that they had yet to see the other side of the story - the Democratic response.

But, Democrats on the House Intelligence Committee have already given us some indication how they feel about the memo. They're under the impression it was cherry picked to protect President Trump.

“The selective release and politicization of classified information sets a terrible precedent and will do long-term damage to the Intelligence Community and our law enforcement agencies,” the Democrats said in a statement.