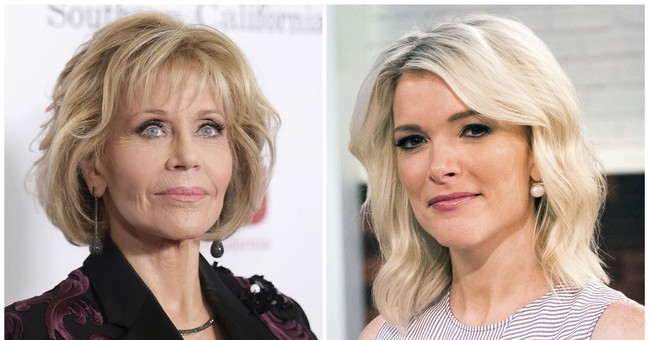 Remember how Megyn Kelly got on Jane Fonda's nerves by asking her about her plastic surgery live on air? Fonda was visibly uncomfortable and asked the host point blank, through an icy glare, "We really want to talk about that now?"

Fonda went on to criticize/mock Kelly for her line of questioning in a separate appearance on the "TODAY" show when she was doing some publicity for her Netflix show, "Grace and Frankie" with her costar Lily Tomlin. Tomlin made a crack about Fonda's facelifts and Fonda quipped, "Who are you, Megyn Kelly?"

Kelly has had enough. On her show Monday, she called out Fonda for obsessing over the interview and even resurrected her "Hanoi Jane" days, when the actress infamously disrespected our troops in Vietnam.

Megyn Kelly responds to criticism from Jane Fonda saying that she has no regrets about asking about Fonda’s plastic surgery. Then she goes on to address Fonda’s own past, “Hanoi Jane,” and says she’s in no position to talk about what’s offensive. pic.twitter.com/woNQ9WcLNf

"When she first complained publicly, and repeatedly, I chose to say nothing," Kelly explained. But, since Fonda keeps bringing it up, Kelly said it's time to address the "poor me" routine. Fonda was promoting a new film about aging, yet Fonda is not your typical 80-year-old woman, Kelly noted.

"If Fonda really wants to have an honest discussion about older women's cultural face, then her plastic surgery is tough to ignore."

Fonda was happy to talk about her cosmetic surgery in a number of places before stepping into Kelly's studio, she added.

Then, things got really interesting. Kelly proceeded to note Fonda's history of shaming our nation's veterans, earning her the nickname "Hanoi Jane." Some in Kelly's audience clapped when the host excoriated Fonda for that infamous photoshoot in which she posed on an anti-aircraft gun intended to shoot down American pilots.

Fonda has no right to lecture about what's offensive and what isn't and Kelly has "no regrets" about her question, the host concluded.