Here's What Came Out of the North Korea-South Korea Talks 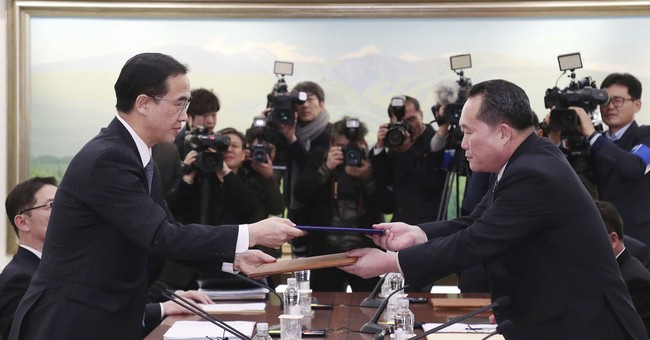 North Korea and South Korea sat down for talks in Panmunjom Monday in the first meeting of its kind in over two years. The summit appears to have been successful, for North Korea has announced it is sending a congregation to the Winter Olympics in Pyeongchang next month.

Tensions have been high this past year as North Korean leader Kim Jong Un has defied warnings from the United States and continued to test ballistic missiles. President Trump spoke out against the dictator at the United Nations General Assembly in the fall, even referring to him as "Rocket Man." Kim Jong Un is on a "suicide mission," Trump said at the time.

Still, Trump had high hopes for the talks between North Korea and South Korea. South Korea said it could lift sanctions temporarily so North Korean officials could visit for the Games. PyeongChang is just 60 miles south of the Demilitarized Zone.

"We have high expectations that the Olympics turn out to be a peace festival with special guests from the North," Myoung-gyon said.

Other South Korean officials have praised the talks.

"When the ancient Greeks used to hold the Olympics, they held a truce," according to Moon Chung-in, a special adviser on foreign affairs and national security to South Korean President Moon Jae-in. "We are living in a civilized world. It is the logical choice."

Bruce Klingner, former CIA deputy division chief for the Koreas, is not sure that the Korea talks are as optimistic as the media is making them out to be, if his op-ed for The Heritage Foundation last week is any indication. Be very suspicious of Pyongyang, he warned.

Pyongyang’s offer to attend the Olympics may seem novel, but almost all of its past New Year’s Day speeches have called for Seoul to resume the dialogue that Pyongyang had severed, or to reduce the tensions that North Korean had escalated with its provocations, threats, and deadly attacks.

The PyeongChang Winter Olympics will be held Feb. 9-25.