Flake: Trump Rallies are Full of 'Anger and Resentment' 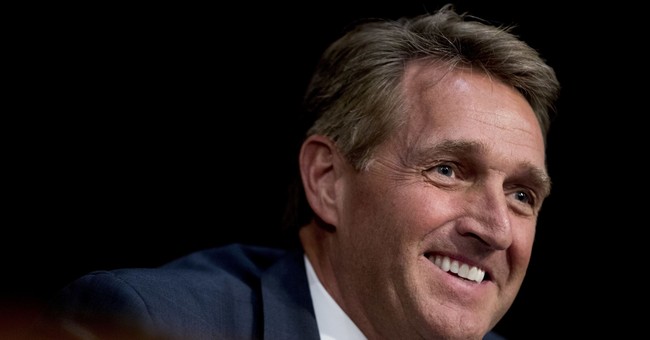 Sen. Jeff Flake (R-AZ)  is still acting like a thorn in President Trump's side - even on Christmas weekend. Speaking to ABC's "This Week," Flake condemned the president's rallies as bastions of resentment.

"When you look at some of the audiences cheering for Republicans, sometimes, you look out there and you say, 'those are the spasms of a dying party,' " Flake said on ABC's "This Week."

"When you look at the lack of diversity, sometimes, and it depends on where you are, obviously, but by and large, we're appealing to older white men and there are just a limited number of them, and anger and resentment are not a governing philosophy," he continued. (The Hill)

The hostility between Flake and Trump started when we learned of Flake's "secret" book, "Conscience of a Conservative: A Rejection of Destructive Politics and a Return to Principle," in which he trashed Trump's agenda. The 45th president had a major hand in "compromising" the Republican Party's morals, the politician/author suggested. After the discovery, Trump mocked the senator at a rally in Phoenix.

Since then, Flake has continued to distance himself from the president, most recently refusing to support Alabama Senate candidate Roy Moore in the special election race to replace Jeff Sessions. Moore denied the sexual assault allegations against him heading into Election Day, but the whole scandal encouraged Democrats to head to the polls in droves and elect Doug Jones, the first Democrat to a Senate seat in Alabama for 25 years. Many top Republicans urged Moore to drop out of the race, but Flake was so opposed to Moore's candidacy that he went so far as to donate to Jones's campaign.

Even with Moore's defeat, he will continue to be a "stain" on the GOP, Flake said Sunday.

He was happy to show his followers that he received a "Decency Wins" mug from a fan this weekend for his rebellion against the president. He tweeted those same two words on December 12, the day Moore lost.

This mug was left at my door today. Thank you. What a thoughtful Christmas gift. #DecencyWins pic.twitter.com/htj7PrLnbj