'No Finer Institution': Wray Defends His Agency Amidst Interrogation About Integrity 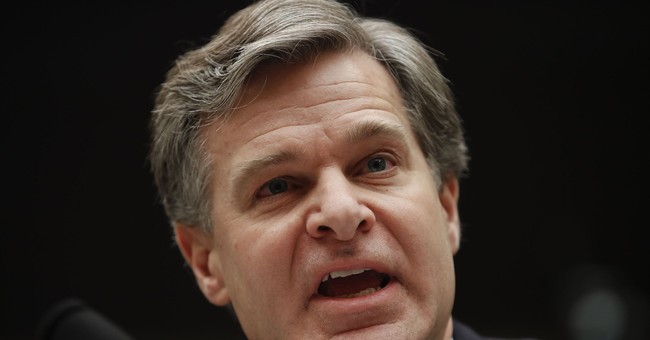 Wray said every agency has its issues and the FBI was certainly not free of wrongdoing, but the majority of the tens of thousands of agents who work for the agency do commendable work on behalf of Americans they have never even met. He pushed back at President Trump's suggestion that the FBI is in "tatters."

"The FBI that I see is tens of thousands of brave men and women who are working as hard as they can," he said, adding that they are "committed to the highest principles of integrity and professionalism."

"There is no finer institution than the FBI," Wray told the panel.

Yet, the agency is still knee deep in scandal. The most heated line of questioning came via Rep. Jim Jordan (R-OH). During his five minutes, he repeatedly demanded to know if the agency was going to reveal who produced the application to the FISA court to obtain a warrant to spy on individuals associated with the Trump campaign.

Jordan is under the impression it was FBI agent Peter Strzok, who was released from the special counsel probe after it was revealed he sent anti-Trump texts to his mistress. Did Strzok use the "fake-news Enquirer garbage" Trump dossier to produce that application?

Wray suggested he couldn't present the FISA material because it is "classified."

Strzok is also the agent who downgraded Hillary Clinton's handling of national security intelligence on her private server from "gross negligence" to "extremely careless."

Wray heard all the panel's concerns, yet said he prefers to wait for an Inspector General report to see if he needs to hold people accountable.

Katie reported on what else Wray is doing to address biases within the agency.