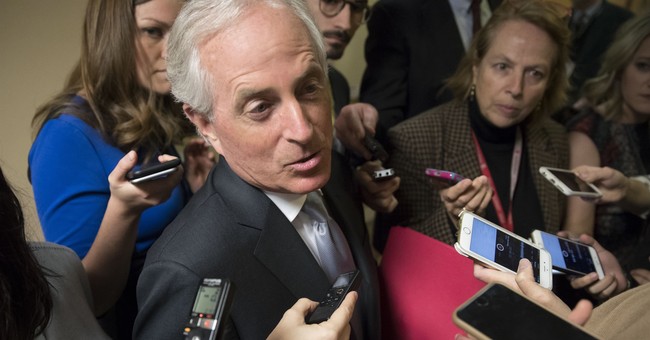 The Senate Foreign Relations Committee chairman was very serious, if his latest announcement says anything.

Sen @BobCorker announces Authority to Order the Use of Nuclear Weapons Hearing pic.twitter.com/XKfnj5QyW6

The hearing would be the first of its kind since 1976, Corker noted.

“This discussion is long overdue, and we look forward to examining this critical issue.”

Corker, it's worth noting, has been publicly feuding with Trump since the latter published a tweet in October telling his supporters that Mr. Corker decided not to run for re-election in Tennessee because he “didn’t have the guts."

Before Corker announced the series of hearings on the use of nuclear weapons, Democrats like Rep. Ted Lieu (D-CA) and Sen. Ed Markey (D-MA) introduced the Restricting First Use of Nuclear Weapons Act to prevent Trump from launching a preemptive nuclear attack without Congress first approving a declaration of war.

Their efforts appear to be in response to Trump's fiery rhetoric against aggressors like North Korea. At the United Nations General Assembly in September, the president warned Kim Jong Un to expect retaliation should he consider striking the U.S. and her allies with nuclear capabilities.

"The United States has great strength and patience, but if it is forced to defend itself or its allies, we will have no choice but to totally destroy North Korea," he said at the time.