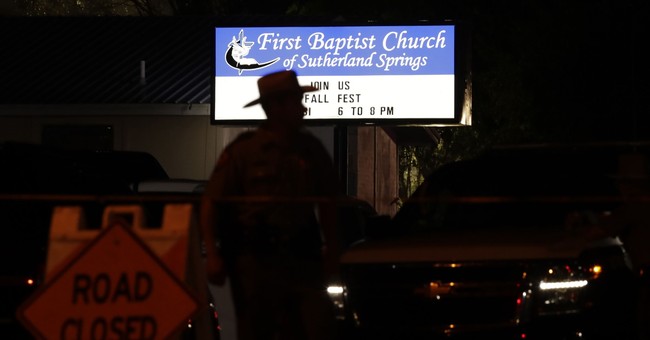 The Sutherland Springs murderer has killed about 4 percent of the small town's population. With 26 people dead, it is the largest mass shooting in modern Texas history.

Thoughts and prayers are making their way to the victims' families and the pained community. Unfortunately, with those kind sentiments, a political debate has already begun brewing. Former President Obama has weighed in on the church shooting in Sutherland Springs, Texas, for instance, in a predictable manner - by offering his condolences, then quickly bringing up gun control.

May God also grant all of us the wisdom to ask what concrete steps we can take to reduce the violence and weaponry in our midst.

The New York Times editorial board was less subtle in its request. "It's Not Too Soon to Debate Gun Control," their headline screamed Sunday. When is Congress going to speak up?

Still, Republicans leaders in Congress do nothing. Or, really, so far they’ve done the same thing they have always done: offered thoughts and prayers. Tomorrow, then, will surely bring warnings not to “politicize” a tragedy by debating gun controls that might prevent such mass killings from happening again.

Then, the editors published an actual clock tallying how many hours and minutes it's been since the shooting occurred, asking how long it will be until it's acceptable to begin the conversation on guns. So far, the count is at 22 hours.

The editors said that if Sutherland Springs is too soon to begin the debate, then how about a slew of other mass shootings? Other tickers on the page, for instance, reveal it's been 35 days since the Las Vegas massacre, 486 days since the Dallas, Texas shooting, and 512 days since the Pulse night club shooting in Orlando.

If it was up to the Times editors, they'd make sure that Republicans would "not be allowed to delay effective legislation any longer."

President Trump says the guns aren't to blame, but the shooter's mental condition.

"Mental health is your problem here," Trump said Sunday from Tokyo. "This isn't a guns situation...This is a mental health problem at the highest level."