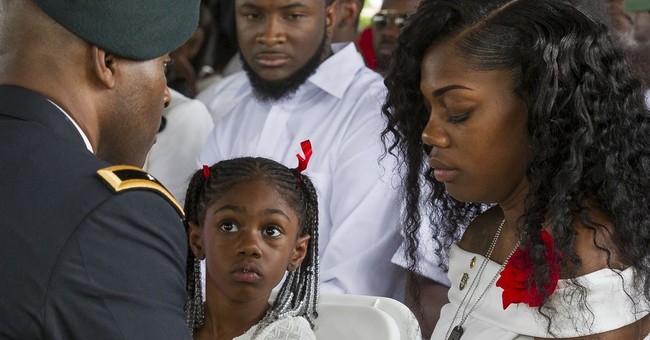 Myeshia Johnson's late husband Sgt. La David Johnson was a hero. A soldier serving on a mission in Niger, he was killed earlier this month, along with three of his comrades, when they were ambushed by Islamic State fighters.

Unfortunately, Johnson's death has become a political firestorm that has pitted President Trump against a Democratic representative and their feud has become the story. Rep. Frederica Wilson (D-FL) was in the car with Mrs. Johnson when she received a condolence call from Trump. Wilson admits she didn't hear their whole conversation, but insists she heard Trump say, insensitively, that Johnson's husband "knew what he signed up for."

Trump and his chief of staff, John Kelly, a retired Marine general who lost his son in combat in 2010, rejected Wilson's account. The president even called Rep. Wilson "wacky" on Twitter the morning after Sgt. Johnson's funeral.

Well, Mrs. Johnson has finally spoken out and is siding with the representative. In an interview with "Good Morning America" Monday, Mrs. Johnson says that Rep. Wilson is "100 percent correct." Trump did forget her late husband's name.

"I heard him stumbling on trying to remember my husband's name, and that’s what hurt me the most because if my husband is out here fighting for our country and he risked his life for our country why can’t you remember his name," said Johnson, who had known her husband since she was 6 years old.

"That’s what made me upset and cry even more because my husband was an awesome soldier."

Trump weighed in on the controversy again Monday morning in response to the widow's interview.

I had a very respectful conversation with the widow of Sgt. La David Johnson, and spoke his name from beginning, without hesitation!

In the midst of the bickering, members of Congress are demanding an investigation into the Niger mission.

For the sake of the soldiers' sacrifices, let's hope this controversy does not last many more weeks.