McCain Threatens Subpoena to Get Niger Information Out of Trump Admin 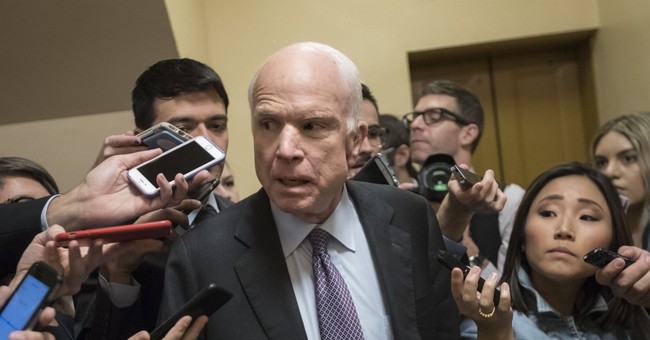 Sen. John McCain (R-AZ) is infuriated with the Trump Administration's lack of transparency in regards to the Niger mission that resulted in four American troop deaths after an Islamic State ambush. Having gotten nowhere so far, the senator indicated he's ready to issue subpoenas.

"It may require a subpoena," McCain told CNN. "I did have a good conversation with Gen. McMaster and they said they will be briefing us. We have a long friendship and we will hopefully get all the details.”

#SecDef: investigation into #Niger operation ongoing. Urged patience, they do not have all facts yet. Said "contact was considered unlikely"

But, McCain is impatient for answers. He suggested that several lawmakers may not even have known that we had an operation in Niger.

McCain said it's not necessary to wait for the Defense Department to finish its investigation.

"That's not how the system works. We're coequal branches of government," McCain, the chairman of the Senate Armed Services Committee, said. "We should be informed at all times.

McCain told the press Wednesday that although he has a history with both McMaster and Defense Secretary James Mattis, he said he had a better working relationship with Obama and his defense secretary.

“I had a better working relationship, as far as information back and forth, with Ash Carter than I do with an old friend of 20 years,” he said.