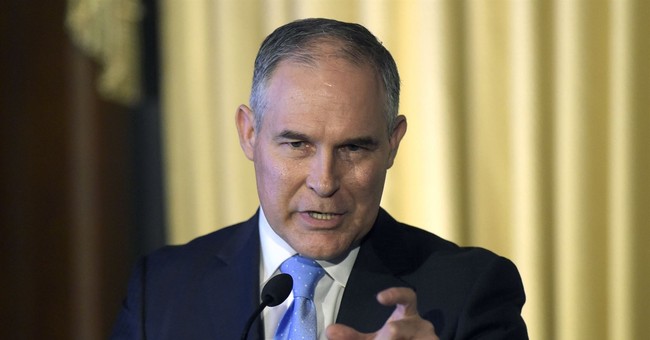 The Environmental Protection Agency, under President Obama, acted well beyond its authority when it implemented the Clean Power Plan, the Trump administration suggests in a new proposal. The document is expected to be revealed in its entirety by next week.

The Clean Power Plan was introduced in 2015 to minimize power plants' carbon dioxide emissions. It came with a list of regulations intended to steer states away from coal and toward natural gas. It is, Politico notes, President Obama's "most important climate regulation." But, the Trump White House argues it comes with too high a price.

The Trump administration is set to rescind former President Barack Obama’s most important climate regulation, arguing that the greenhouse gas standards for power plants violated federal law and could cost consumers as much as $33 billion, according to a draft proposal obtained by POLITICO.

Think the Trump administration were the only ones to disapprove of the plan? Think again. More than half the country sued the Obama administration over the rule. In April, the Supreme Court suspended the lawsuits, suggesting the plan was nearing its end.

In its draft proposal, the EPA explains that the agency's mission is still to “protect and enhance the quality of the nation’s air resources,” but they must act within the bounds of Congress. The Clean Power Plan does not fit the bill.

“The EPA is proposing to repeal the CPP in its entirety. The EPA proposes to take this action because it proposes to determine that the rule exceeds its authority under the statute, that those portions of the rule which arguably do not exceed its authority are not severable and separately implementable, and that it is not appropriate for a rule that exceeds statutory authority — especially a rule of this magnitude and with this level of impact on areas of traditional state regulatory authority — to remain in existence pending a potential, successive rulemaking process.”

“We already knew Donald Trump and Scott Pruitt reject science, but this smearing of the Clean Power Plan’s massive public benefits shows they reject basic math, too,” Liz Perera, the climate policy director at the Sierra Club said. “The Trump administration’s assault on the Clean Power Plan is about one thing and one thing only: helping corporate polluters profit.”