No Clarification on Trump's 'Calm Before the Storm' Remark 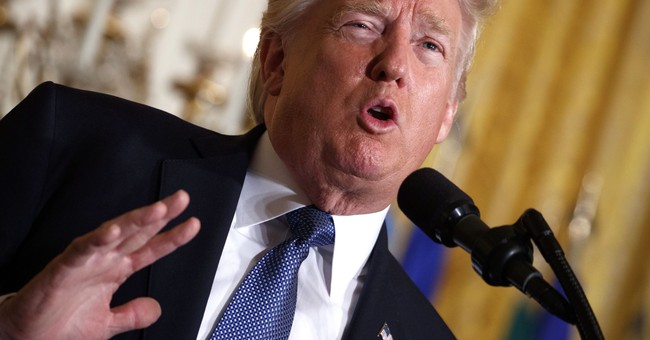 President Trump's "calm before the storm" remark has had reporters guessing all day. The commander-in-chief had a smile on his face when he made the ominous comment Thursday night, standing in front of a group of his military leaders after hosting a dinner for them and their spouses. Was he suggesting that the U.S. is ready to make a military move, like a strike on North Korea? Or, was he just trying to keep reporters on the edge of their seats?

The president was asked what he meant, to which he replied, "You'll find out."

The press tried to get answers again on Friday, and they got the same reply - this time with a wink.

White House Press Secretary Sarah Huckabee Sanders was asked repeatedly about the comment at Friday's briefing, but she too offered little in the way of clarification. Trump's comment was "extremely serious," she said, but no way is the president about to broadcast his plans for North Korea, she told an inquisitive Jim Acosta.

"He doesn't want to lay out his game plan for our enemies," she insisted.

Yet, some journalists are concerned that Trump is taking his job as commander-in-chief too lightly. CNN's Chris Cilizza argued that the president's "calm before the storm" remark proves he is treating a potential military strike like a "reality show cliffhanger." Fox's Shepard Smith said nearly the exact same thing on his show Friday, noting that Trump's military meeting felt like a "tease for a reality show."

Other pundits are openly musing whether Trump is employing the "madman theory" to spook his foreign adversaries.

Chris Cuomo Is Now Out of His Second Media Job, Too
Townhall
'Sir, do you even remember what my question was?' Prosecution just needs to sit back and let Jussie Smollett continue to bury himself
Twitchy
Latest Poll Numbers Spell Doom for Democrats — and Bust Some Narratives Along the Way
Redstate
Jussie Smollett Gets Destroyed During Cross Examination
PJ Media