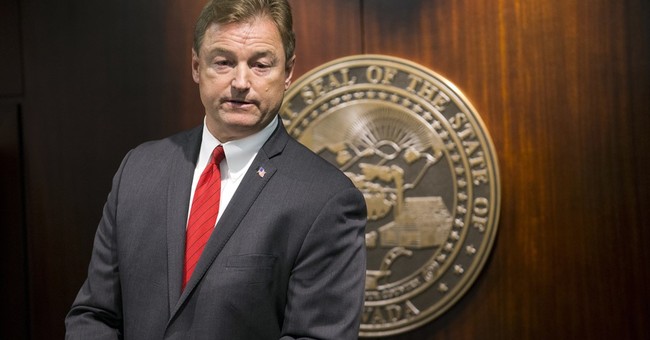 The press stormed Republican senators as they were filing out of their lunch with President Trump Wednesday, which he had scheduled abruptly to talk health care. In his opening remarks at the meeting, President Trump told the senators that they need to forget about vacation until they have a serious health care plan in place.

"Obamacare was a big lie," Trump said of his predecessor's signature legislation.

"I intend to keep my promise and I know you will too," he added. "We have no choice. We have to repeal and replace Obamacare."

Trump then picked out a few of the senators who have been giving him and the GOP leadership headaches by failing to get behind the repeal and replace legislation - including one who was sitting right next to him.

Sen Heller's reaction when Pres Trump says "And he wants to remain a Senator, doesn't he?" is priceless --> https://t.co/83EyrSmwbr

“This was the one we were worried about, you weren’t there," Trump said to Sen. Dean Heller (R-NV), who was sitting to his right. "You’re going to be. Look, he wants to remain a senator, doesn’t he? Okay, and I think the people of your state, which I know very well, I think they’re going to appreciate whenever you do.”

As you can see, Heller turned visibly uncomfortable after Trump's remarks.

The Nevada senator was one of a few Republicans last week to express hesitation about the bill due to its supposedly inefficient funds for Medicaid.

Sen. Susan Collins (R-ME) shared Heller's concern, and Wednesday's meeting only exposed the tension between her and the White House.

Collins says she wasn't invited to GOP healthcare meeting until this afternoon and has another commitment (!)

Senate Majority Leader Mitch McConnell addressed reporters after the lunch to announce that next week the Senate will be voting on a motion to proceed on the legislation. Yet, GOP senators like Shelley Moore Capito (WV) said they still plan to vote no, while others like Rand Paul (KY) and Lisa Murkowski (AK) say it's not even clear which bill they're going to be considering.