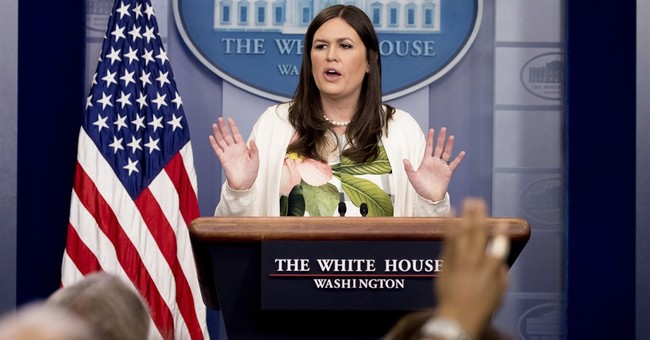 Deputy Press Secretary Sarah Huckabee Sanders stepped in for Sean Spicer at the White House Tuesday. Part of her job was to respond to CNN's shoddy reporting about potential Russian collusion with Trump aides. The since retracted story resulted in three resignations and an apology from the network.

“News outlets get to go on day after day and cite unnamed sources,” Sanders sighed.

She added that the American people deserve better from the news media.

It was at this point that White House reporter Brian Karem shot back at the deputy press secretary.

"You’re inflaming everybody with those words," the reporter said, adding later that "everybody in this room is only trying to do their job."

Huckabee Sanders said she "disagreed completely" with his assessment. She was not inflaming anything - she was just responding to a question.

Karem followed up on his explosive exchange with Huckabee Sanders after the briefing, noting that unlike the White House, journalists hold themselves accountable.

So, when we are wrong we correct ourselves but when has POTUS ever done that? We are not FAKE news.

CNN's Michael Smerconish said more of the same in a Facebook message, noting that the incident was a chance for the network to prove it takes responsibility for its actions.

Nevertheless, President Trump had a harsh response for CNN's tenuous report, tweeting Tuesday morning that the "fake news" channel will continue to suffer in the ratings for it.