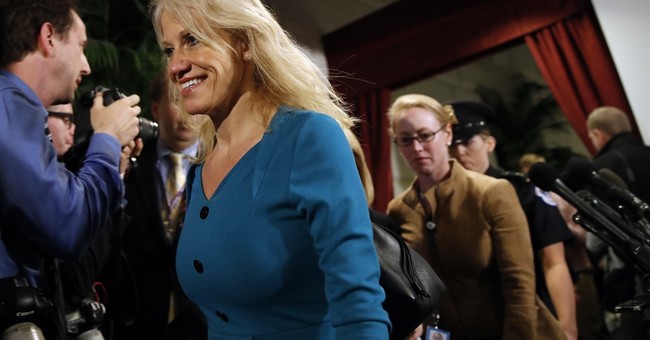 White House adviser Kellyanne Conway was confused by President Obama's first public appearance since leaving the White House Monday. His reemerging figure has her wondering who can claim that they are the leader of the Democratic Party. She listed off a cast of familiar characters, none of whom have exactly been exuding leadership lately.

"President Obama reminded me yesterday [that] I have no idea who the leader of the Democratic Party is. Is it him, on whose watch they lost the White House, the House, the Senate, nearly 1,000 state legislative seats, lots of chambers and governorships? Is it Tom Perez who now actually has that title as leader of the Democratic National Committee but who was booed routinely through his profanity laced appearances last week on his disunity tour?

Is it Bernie Sanders who won 22 states last year in the Democratic Primary but refuses to call himself a democrat? In fact he’s a socialist and who I think is getting in the way of Tom Perez. Is it any one of these septuagenarians like Bernie Sanders or Joe Biden - I don’t know who the head of the Democratic Party is. Is it Hillary Clinton whose still out there on the stump, won’t go quietly into thy night?"

Profanity, boos, rants, and socialism. The party is desperate for a clear direction.

Perhaps they should listen to Democrats like Rep. Tim Ryan (OH) or Sen. Joe Manchin (WV), who have urged the party not to ignore red states or stonewall the president at every turn.

Unfortunately, as the Republican National Committee documented in a new video, "100 Days of Obstruction," Democratic leaders have become so partisan that they are refusing to even step in the same room as Trump.