Sanders Was Happy to Work With Trump on Trade, But Now Says He's a 'Fraud' 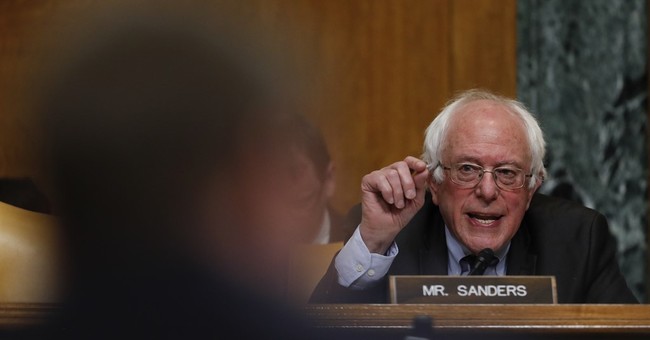 Sen. Bernie Sanders (I-VT) found some common ground with President Trump on trade recently. The former Democratic presidential candidate praised Trump's decision to pull the U.S. out of the Trans-Pacific Partnership, even noting he'd be "delighted" to work with him in the future on policies that are positive for the average American worker.

That bromance didn't last long. On Sunday, Sanders took a much different tone, telling CNN's Jake Tapper that the president is an imposter because he is awarding way too many Wall Street billionaires cabinet positions.

"It is hard not to laugh, to see President Trump alongside these Wall Street guys," Sanders said. "I have to say this, Jake, and I don't mean to be disrespectful, this guy is a fraud."

"I think he is going to sell out the middle class," he predicted.

Sanders perhaps has a right to air his grievances about Trump's cabinet, but he lost me when he said the Trump White House was going to "go after the needs" of families, the elderly, the children, the sick, and the poor. It brings to mind the exaggerated charges against vice presidential Paul Ryan in 2012. Remember the ad that claimed his conservative policies amounted to throwing grandma off a cliff?

Sanders would do well to find more common ground where he can.