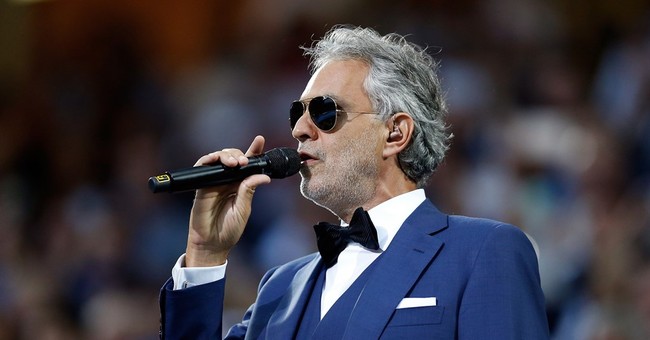 Andrea Bocelli has one of the most beautiful voices of our generation. As a blind singer, the Italian tenor has inspired millions. Yet, that hasn't stopped intolerant liberals from bullying him. Because Bocelli was open to performing at Donald Trump's inauguration next month, some of the singer's fans have abandoned him.

Social media users created a cruel hashtag called #boycottBocelli, warning the singer to stay away from the incoming Republican president or expect empty seats at his concerts.

.@AndreaBocelli I love your voice, but will feel obligated to join #BoycottBocelli if you sing at Trump's coronation.?? Please don't.????

Just deleted my @AndreaBocelli playlists on Spotify & iTunes. Someone who performs for fascists (Trump) gets none of my $. #boycottbocelli

After hearing that @AndreaBocelli will be playing for @realDonaldTrump, I'm out. I'm also out $400. WORTH IT. Stand up and #boycottbocelli.

After all the backlash, Bocelli has decided not to accept Trump's invitation.

Jackie Evancho, a 16-year-old opera who gained fame on "America's Got Talent," is still scheduled to sing the national anthem on January 20.