Immigration Attorney: ‘Show Me One City That Is Not Following Immigration Enforcement’ 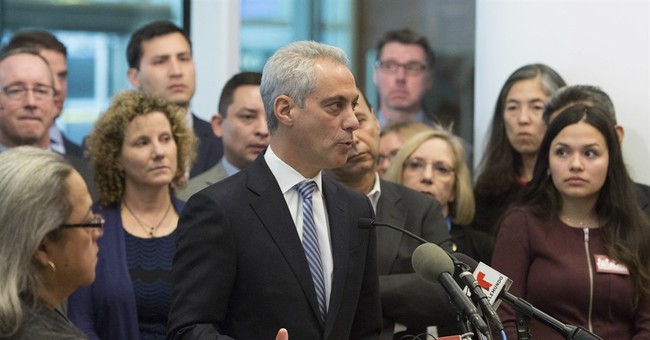 David Leopold, from the American Immigration Lawyers Association, got into a nasty debate with Rep. Andy Harris (R-MD) on the local Fox Baltimore program Wednesday night regarding the legality of sanctuary cities. Harris, who is staunchly opposed to these localities that do not comply with federal requests for illegal immigrants, recently introduced a bill, H.R. 6468, that will withhold federal funds from them.

Leopold, who wrote a lengthy op-ed in Medium defending sanctuary cities - or, what he likes to call them, "welcoming cities" - insists they're all about keeping families and communities "safe." In his piece, he argues that these cities enforce state and local law. He quotes The Economist to try and beef up his argument.

Did he forget about the unreported crime that the undocumented immigrant has committed?

"Every police officer, every law enforcement agency arrests all criminals that they find, whether or not they’re citizens," he said at Wednesday's debate. "To suggest otherwise is a disservice to the public."

"Harris’ bill does nothing to make communities safer," he added. "What it does do is to hold citizens longer than they’re supposed to. That bill doesn’t uphold the law."

At one point in the heated back and forth, Leopold asked his opponent to "show him one city that is not following immigration enforcement."

Harris accepted the challenge and off the top of his head named San Francisco. The California city was the scene of a tragedy in the summer of 2015 when a young woman named Kate Steinle was killed by an illegal immigrant, Juan Francisco Lopez-Sanchez, who had been deported numerous times.

Steinle's murder was "horrible," Leopold said. Yet, "people who are anti-immigrant took advantage" of her death to try to "broadbrush" all immigrants as criminals.

Leopold said it was the federal government's fault. They had failed to properly inform San Francisco of Lopez-Sanchez.

A few other points Leopold tried to make were that immigrants in this country "commit crime at a much lower rate than natural born Americans" and they "do not take jobs, they create jobs."

"We’re not competing with immigrants," he said.

How does he explain that the American people just voted for Donald Trump, whose most consistent campaign initiative was to stop illegal immigration?

Rep. Harris responded with a simple reminder: Every single one of these undocumented immigrants have broken the law.

“Your job is to defend illegal immigrants,” he concluded.