The Scott Family Responds to Video Footage of Charlotte Shooting 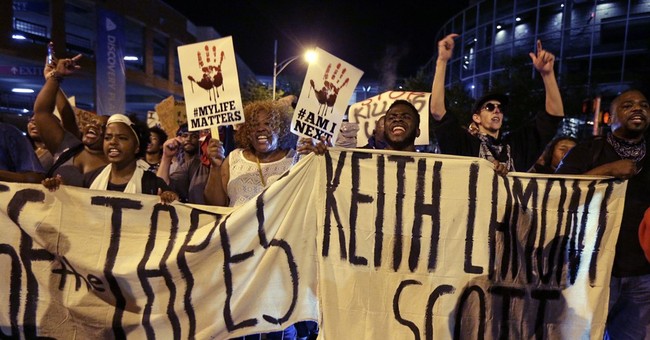 After calls from Keith Lamont Scott's family for the Charlotte-Mecklenburg Police Department to release the video footage from this week's fatal shooting, they have complied. CNN showed the dash cam video from the deadly encounter live on air on Saturday. The Charlotte police approached Scott after they discovered him with marijuana. In the video, we see the two officers beside the truck as Scott steps out of his car, seemingly retreating from the truck, before they shoot him. In the body camera video, we see another angle of the incident, with Bob Owens at Bearing Arms noting you can clearly see Scott wearing an ankle holster. (Warning: graphic)

At a press conference Saturday night, the Scott family attorney Justin Bamberg insisted the footage suggests the police officers' shooting was not justified.

"Mr. Scott doesn't appear to be acting aggressive" in the video, Bamberg says. "He doesn't lunge at the officers. It appears he has his hands by his side. The moment he is shot, he is passively stepping back."

Furthermore, he says one cannot say Scott was wielding a gun because it's impossible to identify what is in his hand at the time of the shooting.

"Unfortunately, we are left with far more questions than we have answers" after watching the video, he said. "It doesn't make sense."

"We shouldn't have to humanize him in order for him to be treated fairly."