Hillary: 'What Would Reagan Say?' 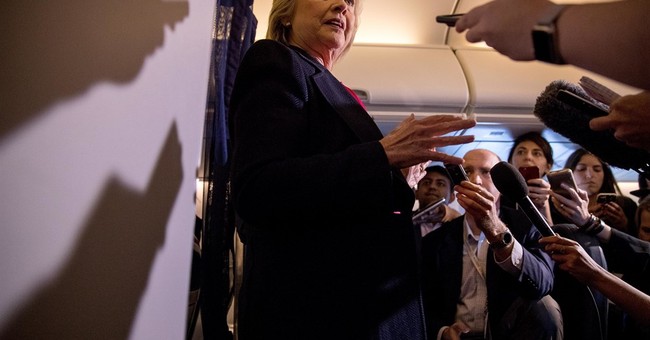 Democratic nominee Hillary Clinton held a rare press conference (her first in over 277 days) following Wednesday night's national security forum with NBC's Matt Lauer. At the presidential meeting, Trump again defended his praise for Russian President Vladimir Putin. His words caused Clinton to ask what Ronald Reagan, the late beloved leader of the conservative movement, would think about the GOP's current presidential pick, especially one who offers more compliments for aggressive Russian President Vladimir Putin than our own president.

"I was just thinking about all of the presidents that would just be looking at one another in total astonishment. What would Ronald Reagan say?" Clinton told reporters at her first formal press conference since December. "About a Republican nominee who attacks America's generals and heaps praise on Russia's president? I think we know the answer."

Clinton also claimed to reporters that after Wednesday's forum, more retired admirals and generals have decided to support her candidacy. Yet, Trump has plenty of support of his own from the military. Earlier this week, a group of 90 military figures announced they were voting for the Republican.

Pundits would suggest Clinton has plenty of ammunition to use against her opponent in terms of who is more qualified or who has the better temperament to be commander-in-chief. Her choosing to invoke President Reagan, who stood for every value she has sought to undermine, is not going to work.

The perfect response from Trump, be it via tweet or during a presser, would be the question, "What would Reagan think of Hillary Clinton, whose radical, liberal and freedom-squashing policies are the complete opposite of what America stands for?"