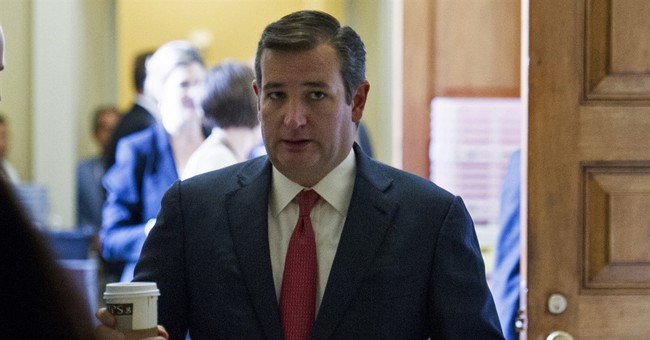 In a very tense meeting with the Texas delegation Thursday morning at the Republican National Convention, Sen. Ted Cruz (R-TX) was asked repeatedly to explain his behavior the previous night. Cruz gave a speech in which he laid out a conservative vision for the future, but the message was overshadowed by what wasn’t in his speech – a Donald Trump endorsement. Instead of telling voters to support the GOP nominee, he told them to “vote their conscience” – a seeming nod to the “Never Trump” movement, who used the same word on Monday when they tried to prevent a Trump nomination.

Just like Wednesday night’s speech, Cruz was met with applause, yet dismissed with boos on Thursday.

Cruz defended his speech to the Texas delegates by insisting he never said one bad word about Donald Trump, and he doesn’t intend to in the future.

“I won’t be talking negative about Trump going forward,” he promised.

It wasn’t so much about Donald Trump, Cruz argued, but about the need to defend the United States of America.

“This is about standing for what we believe in,” he said.

“They knew exactly what I was going to say,” Cruz said, convincing him that they believed his delivering that message would encourage people to get out to vote.

“I asked Americans – do not stay home in November.”

His speech, he said, was an “outline to Trump and his campaign on how to win.

The dominant message has to be freedom, Cruz urged. If “email server” is last word, “we’re going to lose.”

Yet, Cruz then appeared to throw some shade at Trump supporters who booed him off stage last night.

It was somewhat dismaying, he said, that apparently some of Donald’s biggest partisan supporters, when they heard him say people should vote for someone they trust and they know will defend the Constitution, they immediately began booing.

“What does it say when you stand up and say vote your conscience and rabid supporters of our party say ‘what a horrible thing to say?’” he asked.

During the question and answer section, Cruz sparred with a few Trump supporters, one of whom (loudly) reminded the Texas senator he was supposed to honor his pledge and support the party.

Cruz said he’s happy to talk to the gentleman, but will “not get in a screaming match” with him. “I believe in treating people with civility,” he said.

“I’m going to defend your rights even to insult me,” he said to another combative attendee demanding to know why Cruz won’t endorse Trump.

Cruz then proved this was still a personal issue, referencing Trump’s attacks on both his wife Heidi and his father Rafael.

Cruz spoke at the convention, “despite the fact” that the Trump campaign has never taken back what they said about his family, he said.

“I am not in the habit of supporting people who attack my wife and attack my father," he said.

.@tedcruz responds when asked why he didn't follow through on pledge to endorse Trumphttps://t.co/YwCmJbZVYM

“I can tell you, I’m not voting for Hillary.”

Between Wednesday’s night’s speech and Thursday morning’s combative meeting, it begs the question whether Cruz is being sincere, or just trying to incite trouble and prepare himself for a 2020 presidential run.

I’ll let another Texas delegate have the last word.

“I have to say, it’s not about Trump or Cruz, it’s about the United States of America.”