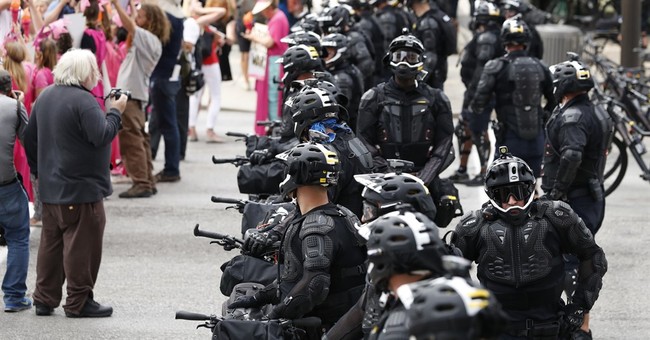 Cleveland Police Chief Calvin Williams addressed reporters Monday morning as this week’s RNC convention was about to get underway, sharing some precautions the force has taken in the wake of the Dallas and Baton Rouge tragedies.

"Our officers have been in two man cars since the tragedy in Dallas" he told the press, meaning that the 40 percent of officers who usually ride alone will have partners in the passenger seat.

Cleveland Police Union President Steve Loomis explained the significance of this change when it was implemented earlier this month.

“There’s safety in numbers so the chief brought the one man cars in and paired them up,” said Loomis.  “It adds a layer of safety for us. It’s harder to walk up to two police officers than it is on one.”

Just two people have been arrested so far in protests outside the convention and no credible threats have been leveled against Williams' officers, yet he also urged civilians and visitors to call the RNC tipline: 1-800-CALL-FBI if they see anything suspicious throughout the week.

Loomis also made headlines this week for urging Gov. John Kasich to ban Ohio's open carry law during the RNC event, arguing it made police “much more difficult” to ensure the convention is safe.

On Monday, however, Williams said the governor did not have the power to suspend the law.

As you can see, Cleveland’s men and women in uniform are not leaving any corner of the Quicken Loan Arena unmarked.