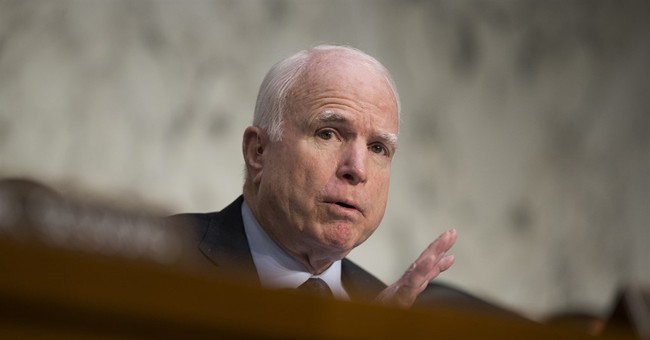 Sen. John McCain (R-AZ) received a lot of flak on Thursday for the following comments:

Shortly after uttering those words, however, McCain is telling the press that he "misspoke" and only meant to blame the president's policies, not the president himself. Specifically, McCain was critical of Obama's decision to prematurely pull troops out of Iraq in 2011. That move, the senator argued, paved way for the rise of ISIL.

Sen. Lindsey Graham (R-SC) defended his friend and colleague's remarks on Fox News Thursday night, telling Greta Van Susteren that Obama is "delusional" to think ISIS is retreating. He is only giving the American people this positive report, Graham argued, because he's "trying to show his policies are working when they're not."

Obama's national security agenda was in the spotlight all day Thursday after CIA Director John Brennan's stark terror report. While the president suggested earlier this week that ISIS was suffering and was on "defense," Brennan clearly said the terror cell was expanding and had serious plans to launch attacks in the West.

Obama has also been roundly criticized for placing a higher priority on gun control than combating terrorism in the wake of the Orlando shooting.