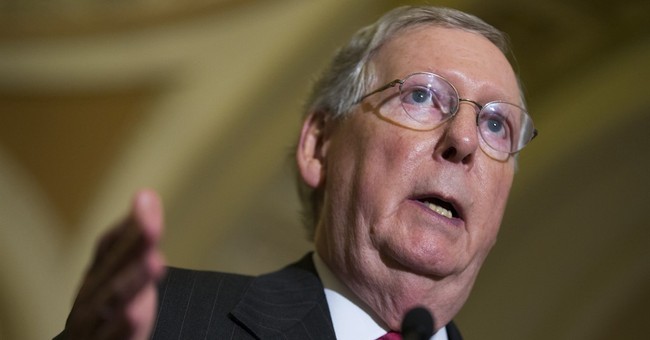 The Defund Planned Parenthood effort has hit another brick wall in Congress. After the House of Representatives  successfully voted to strip the organization of taxpayer money for one year, Republicans just didn't have enough support in the Senate to reach the 60-vote threshold on Thursday. The legislation was blocked in a vote of 47-52. If it had somehow passed, President Obama's veto would have been the final nail in the coffin.

It seems, however, Republicans, led by Majority Leader Mitch McConnell (R-KY) have a backup plan to avoid a government shutdown, or maybe several:

Senate Republican leaders fully expected the legislation to fail and are prepared to move on to their Plan B by introducing a second spending bill that would fund the government at current spending levels through Dec. 11. The Thursday vote was just the start of a carefully planned series of moves designed by Senate Majority Leader Mitch McConnell (R-Ky.) to avert a government shutdown on Oct, 1.

The GOP's second spending bill, a "clean continuing resolution," void of much policy, is expected to easily pass.

Yet, the Republican-led effort to defund Planned Parenthood has caused a schism on Capitol Hill that could complicate the vote. Several conservatives have insisted they would rather see the government shut down than allow another federal dollar to reach the abortion giant's pockets. Sen. Ted Cruz (R-TX), for instance, is in it for the long haul and accused the Republican leadership of caving to the Democrats.

But Mr. Cruz said his own party has promised to surrender instead of leveraging “must-pass” legislation to risk a shutdown and force President Obama to blink first.

Perhaps the more disappointing consideration is that Democrats refuse to budge in their allegiance to Planned Parenthood. I would love to ask those 52 senators who voted in favor of the organization if they've watched the Center for Medical Progress videos. They've had ten chances to do so. No vote should be held until they've witnessed with their own eyes Planned Parenthood officials talking casually about the sale of aborted baby parts.

The outcome (I don't expect, but hope) would be different.