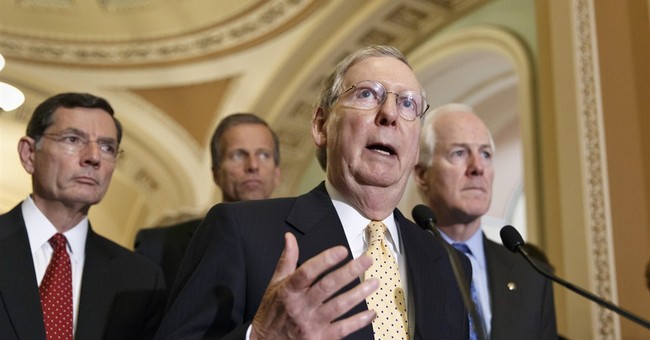 Senate Minority Leader Mitch McConnell sounded more than ready to take the Senate reins from Majority Leader Harry Reid this morning during his passionate speech on this third and last day of the National Right to Life Convention in Louisville, Ky. After lambasting Reid for refusing to take up even modest pro-life legislation in the Senate, the current minority leader offered an alternative to Reid's skewed priorities.

"The guy you're looking at might be a better scheduler."

McConnell, who has introduced and cosponsored a number of pro-legislation since entering Congress, is ready to take the helm once again. He is a cosponsor of the Pain Capable Unborn Child Protection Act, which protects unborn children after 20 weeks - the point at which they can feel pain. While ten states have already approved of the legislation, Reid, who identifies as a pro-life Democrat, nevertheless has refused to even bring forward this modest legislation for a vote in the Senate.

McConnell noted this is an important year for the pro-life cause, for in less than six months voters will decide if President Obama gets to keep a Democratic Senate that has rejected anything stamped with the word "pro-life." The minority leader is hopeful this will change.

"For six years, the president has been isolated from this growing movement [...] He will be forced to listen to the cause that's brought us all here this morning [...] Senate Dems would be forced to take a stand."

He provided specifics on his proposed alternative agenda.

"I'm proud of my record and defense of life. If I was majority leader, we'd already have had a vote on it in the Senate. It's long past time for us to join the ranks of most other civilized nations to protect children past 20 weeks in the womb."

The minority leader also commented on his fight for free speech and couldn't help taking a jab at the Obama administration for its endless string of scandals.

"I'm just as curious as you are as to what happened to Lois Lerner's emails."

The IRS's targeting of conservative groups, however, is no laughing matter. McConnell shook his head saying, "you just can't make this stuff up."

"The government has no business in interfering with what we say. We should have more speech, not less."

Circling back to the main topic at hand, McConnell finished his remarks by noting what a tragedy it is that many women see abortion as their only "choice," yet insisting that we are winning the debate.

"No one regrets the choice for life - especially those who receive it."

Despite the obstacles in Congress, McConnell made a promise to his fellow pro-lifers:

"As long as I'm the senior senator from Kentucky, you can count on me."

A short time will tell if he can add another title to his resume.