Study: Jay Leno Has Told Over 5,500 Jokes About the Clintons 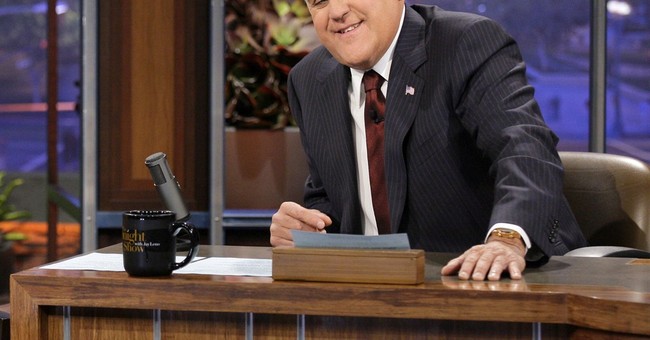 They may be America’s biggest power couple, but it turns out they’re also the biggest brunt of one comedian’s jokes.

Tonight, Jay Leno fans everywhere will tune into “The Tonight Show” to see his last monologue since taking over the NBC late night talker in 1992.

Many people may assume President George W. Bush was the favorite punchline of the popular comedian’s jokes, but the Center for Media and Public Affairs at George Mason University discovered that’s not exactly the case. After evaluating more than 44,000 of Leno’s jokes from “The Tonight Show,” researchers discovered the host’s favorite target over the years was Bill Clinton, not Bush.

According to the study, Leno told 4,607 jokes directed at Clinton — far more than the 3,239 jokes he told at the expense of George W. Bush.

Of the jokes aimed at Clinton, 454 were unsurprisingly in regards to the Monica Lewinsky scandal. A few other politicians who topped the list were Al Gore, with 1,026 jokes and Barack Obama with 1,011.

Hillary Clinton came in fifth with 939 - which means altogether Mr. Leno has told 5,546 jokes about the Democratic Party’s favorite couple.

Here are just of few of the comedian’s best Clinton zingers:

“President [Bill] Clinton has a new program to teach sexual abstinence to young people. Well, those who cannot do, teach.”

“In an effort to help get the airline industry back on track, Ex-President Bill Clinton announced he would fly commercial airlines four times this week. Of course, it's Clinton, you don't know if he's trying to be patriotic, or if he just likes getting patted down.”

“In her Senate campaign, Hillary may drop the ‘Clinton’ and run under her maiden name, ‘Vader.’”

"Looks like Barack Obama has won the nomination. Congratulations. And Hillary Clinton is about to drop out. She has not dropped out officially. That means Bill Clinton's about to hear those three words he's been dreading: 'Honey, I'm home!'"