Half a Dozen Scandals for New York Democrats 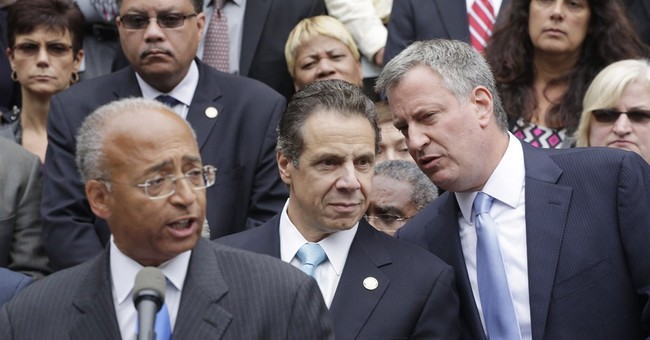 You know about Anthony Weiner. Who could forget Eliot Spitzer. But, did you know there was a slew of other scandals starring Democratic politicians this past year in the Empire State?

Let's start in Manhattan, where New York Assemblyman Micah Z. Kellner is the latest Democrat to suffer the consequences of his inappropriate behavior. He was sanctioned this week after allegations he sexually harassed members of his staff.

Kellner joins a Democratic assemblyman from the Buffalo area, Dennis H. Gabryszak, who last month was accused of making sexually explicit comments to several female aides. So far, six female staffers have filed notices of claim against Gabryszak,(two more coming forward within the time this article was created) accusing him of sexual harassment. The key words being “so far.”

The most serious allegation against Gabryszak surfaced Friday when a former employee accused him of making sexual advances toward her during her very first week on the job. The assemblyman proceeded to assault her throughout her employment.

"When she was in Albany, the Assemblyman insisted that the claimant go to his apartment and look over documents that he had there.She reluctantly agreed to do so. While at the apartment, the Assemblyman grabbed her and tried to kiss her."

But the eye-raising incidents don't end with Kellner and Gabryszak. In May, a powerful Democratic assemblyman from Brooklyn, Vito J. Lopez, resigned amid a sexual harassment scandal. His murky behavior in turn affected Assembly speaker Sheldon Silver, who was criticized for authorizing a secret payment of $103,080 to settle the harassment claims against Lopez. Then, a report suggested Silver himself engaged in inappropriate behavior by trying to “seduce a staffer.”

In the midst of this drama, The New York Post published photos of Mr. Lopez and Mr. Silver under the headline “Dirty Old Men,” according to the Times.

Higher-up Democratic leaders aren’t safe from these indignities either. Republican leaders have criticized Governor Andrew Cuomo for initially turning a blind eye to the questionable behavior:

“When Andrew Cuomo was given the opportunity to appoint a special prosecutor to investigate Silver and root out corruption in Albany, he opted instead for a political Moreland Commission to promote his political goal of taxpayer-funded campaigns.”

Ironically, Assemblyman Kellner, mentioned above as New York’s most recently disgraced Dem, was one politician who called for a full investigation of Lopez.

“I believe the Assembly deserves to know the full truth,” Mr. Kellner said, “and that begins with a complete accounting of the confidentiality agreement — who proposed it, who wrote it, who required it.”

Then we have our friends Weiner and Spitzer. Although their successive scandals occurred a few years ago, they came roaring back into the spotlight when they decided to run for political office yet again. Weiner’s fantastic campaign was complete with his evasive answer to the question if he was still “sexting” and the bombshell that his code name when sending inappropriate messages was none other than “Carlos Danger.”

And, if you thought Spitzer was finally free from scandal after that whole “involved in a prostitution ring,” thing, you haven’t been following New York City politics. After he and his wife announced their divorce, the New York Daily News reported Spitzer was dating then mayor-elect Bill de Blasio’s chief spokeswoman Lis Smith. De Blasio ultimately decided not to keep Smith on his mayoral staff, perhaps trying to avoid the unfolding soap opera.

Witnessing one Democrat after another fall from grace, it's no wonder New York Republican Chair Ed Cox condemned the party for its “culture of corruption” in the December 20 edition of The Buffalo News.

We all know the holiday tune. Except this Christmas, New Yorkers got six geese-a-laying in the form of disgraced Democrats.