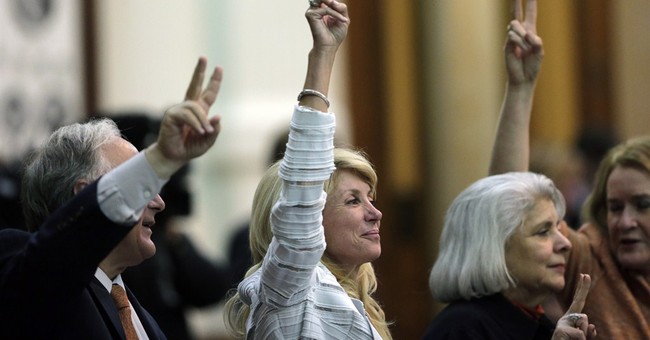 Yesterday, Katie asked if we were “ready” for Governor Wendy Davis. Well, it looks like the Democratic organization Battleground Texas certainly is, stepping up its effort today to get Davis into the governor’s mansion. Here’s the email they sent out to supporters this morning:

It's clear that if Texas Democrats want any chance of beating Attorney General Greg Abbott and his multi-million dollar war chest next November, we need somebody strong to take on the challenge.

I think Wendy's just the right woman for the job. Are you with me?

Texas voters are waiting for a candidate like Wendy to step up and do something no Democrat has done for more than two decades in this state: win a statewide race.

I believe she can do it. But before she makes a decision, Wendy needs to know that you're behind her.

An awful lot of confidence for a woman who is still trailing significantly in the polls when compared to Republican Governor Rick Perry. Public Policy Polling has even called her gubernatorial bid a “long shot” in the solidly red state.

But hey, at least Davis supporters can get some free swag:

Ask her to run for governor, and claim your free "We Want Wendy" sticker.