Huff Po: Bill Clinton Had a ‘Mini-Scandal’ in the ‘90s 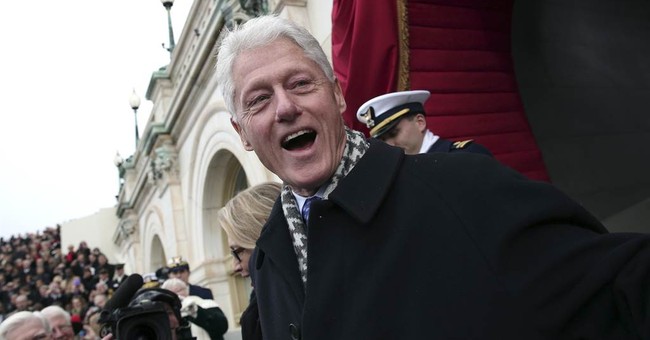 Oh, and he’s a superhero. Thus proclaimed the Huffington Post in a glowing feature published yesterday about the 42nd president and his “many talents,” entitled, “Bill Clinton Has A Superpower, And Mastering It Can Make You Successful Beyond Belief.” The superhuman power? His ability to listen.

Bill Clinton knows how to win friends and influence people. The former president is a master of reinvention -- does anyone even remember that mini-scandal back in the mid-’90s? -- and the same talents that guided him into office have propelled him, more recently, into the stratosphere of Internet stardom. He’s celebrated for his humanitarian work. He selflessly shares vegan health tips. And he effortlessly doles out the kind of sage advice you might find stitched onto a pillow in a country cottage ("You don't have to give anybody your tomorrows").

According to the Huffington Post, Clinton’s “secret to success” is that he“gives everyone he meets his full, undivided attention.” His amazingness also apparently helps the rest of us saps realize our own deficiency, “Our own lack of attention may be part of what makes Clinton's presence even more remarkable.”

Perhaps more painful than reading this article is knowing that President Obama is awarding Clinton a presidential medal of freedom. In a statement announcing this year’s list, Obama explained, “The Presidential Medal of Freedom goes to men and women who have dedicated their own lives to enriching ours." Clinton may have done some good work recently with the Clinton Foundation, but shaming the presidency and lying to Americans about it is not on the list of “enriching lives.” Also receiving the high honor is Ben Bradlee, the former executive editor of the Washington Post who oversaw the newspaper's coverage of Watergate. Interesting how a journalist involved in breaking the high profile presidential scandal of a Republican president is awarded for his work. Where’s Matt Drudge’s medal? Yet, Nixon remains notorious, while Clinton is continually celebrated. Probably because Clinton’s affair was just a “mini-scandal.”

Well, some of us won’t forget how Clinton disgraced what is supposed to be the most respected office in the nation. I wonder if he’s listening?