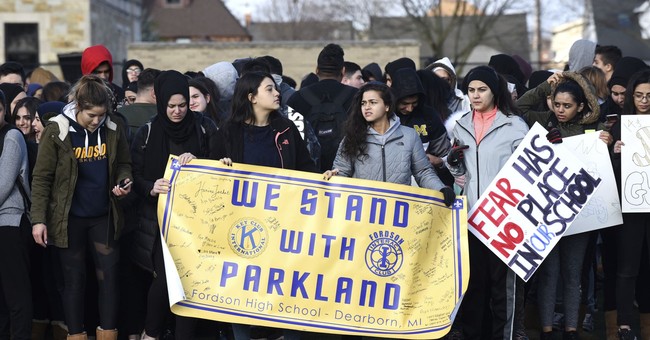 It's been one year since a 19-year-old gunman walked into Marjory Stoneman Douglas High School carrying an AR-15 rifle. He shot and killed 17 students and staff members and injured 17 more. The shooting sparked renewed debate over gun control and student safety. Several students founded the social activist group March For Our Lives, a movement focused on making schools safer from future tragedy. Now, on the first anniversary of the tragedy, the students of MSD are prepared to commemorate.

The school will be having a nonacademic school day ending at 11:40 a.m. to mark the somber anniversary. Meanwhile, the Broward County School Board is sponsoring a "Day of Service and Love," which will include MSD students and staff serving breakfast to first responders. This is will serve as a thank you to the public servants who helped in the aftermath of the shooting.

Three of the March For Our Lives founders made statements on Twitter regarding the anniversary.

One year later, the pain doesn’t get any more bearable. We will miss you forever. #MSDStrong pic.twitter.com/BAdKhM4PBH

A lot of stuff has been happening recently, very good stuff, but there are 17 people who can’t be here to enjoy it.

We can’t forget these names.

We can’t forget these faces. pic.twitter.com/dpMVNnTA38

Thank you for all the kind words and support in this difficult time for many famlies in Parkland.

I will be taking a break from Twitter for the next 3 days.

Please remember the people we're stolen from us that day; they are why we fight for peace.

"I think it's the proper thing to go dark - actually spend that day to ourselves in our own thoughts," said Corin, a senior at Marjory.

The tragedy of the event has been unfortunately overshadowed by the political battle in its wake. The shooting sparked off a renewed wave of gun debates. Those on the left were instant that more gun laws be enacted to protect schools. Those on the right countered that gunless schools would be easy targets for a shooter. President Trump even recommended arming teachers for the protection of students.

As the fight over gun control continues, let's not let the victims get lost in the politics. This isn't a matter of left or right loyalty. This is a matter of protection and prevention. Let's always remember the victims, whether or not we think a bump stock ban could've saved them.