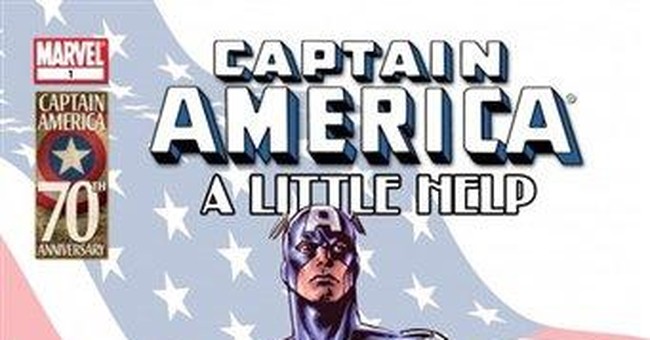 In Ta-Nehisi Coates’ latest edition of Captain America, the former Atlantic correspondent seems to have used the real world ideas of Dr. Jordan B. Peterson as inspiration for the story’s super-villain, Red Skull.

On Tuesday, upon learning of the apparent effort to parody his teachings, Peterson responded on Twitter in disbelief.

Do I really live in a universe where Ta-Nehisi Coates has written a Captain America comic featuring a parody of my ideas as part of the philosophy of the arch villain Red Skull? https://t.co/waFsAvWlfd

Captain America #28 was released March 31, and depicts the radicalization of young American men by the hand of Red Skull, a deceitful foreign enemy who uses the internet and video messages to communicate and rally his supporters.

Although the comic never directly mentions Peterson or his own rise to notoriety through posting YouTube videos encouraging personal responsibility, the comic's multiple references to his work along with the story’s general plot make a persuasive argument that Coates did in fact model his villain on Peterson.

The comic’s most blatant example of this is a panel showing the names of Red Skull’s videos displayed on an open laptop. The titles include “Ten Rules For Life,” “Chaos and Order” and “The Feminist Trap.”

Peterson has long lectured on the dueling ideas of Chaos and Order, with his 2018 bestseller entitled, “12 Rules for Life: An Antidote to Chaos,” and his upcoming book reported to be titled, “Beyond Order: 12 More Rules for Life.”

The international intellectual has also been accused of being an “anti-feminist” for his principled stand against the radical doctrine that, as he said in a 2019 interview, “insists that our culture is best characterized as an oppressive patriarchy.”

In a different panel from the same issue, Captain America explains that Red Skull is capitalizing on his male follower’s search for purpose, saying “he tells them what they’ve always longed to hear. That they are secretly great,” going on to conclude, “That’s their purpose. That’s what they live for. And that’s what they’ll die for.”

Over the years, Peterson has talked extensively on the need for young people, both male and female, to find purpose in their own life before they can live in harmony with others. While his message has been received predominately by young men, that in no way means the message itself is nefarious nor anything but helpful and optimistic.

Ben Shapiro, DailyWire’s Founder and CEO, pointed out on Twitter the absurdity of Coates using the 58 year-old clinical psychologist whose sold over 5 million books worldwide as his model for all things evil.

In our upside-down world, Captain America goes around telling Americans that their country is irredeemably racist and that systemic discrimination is necessary to rectify past injustices.

Ultimately, this comic book is significant because it points to the very heart of the divisiveness inherent in western culture. Are the teachings of Jordan Peterson worthy of being associated with a great evil infecting the minds of many, or, as both Peterson and Shapiro point out, has the West utterly lost it own moral compass?